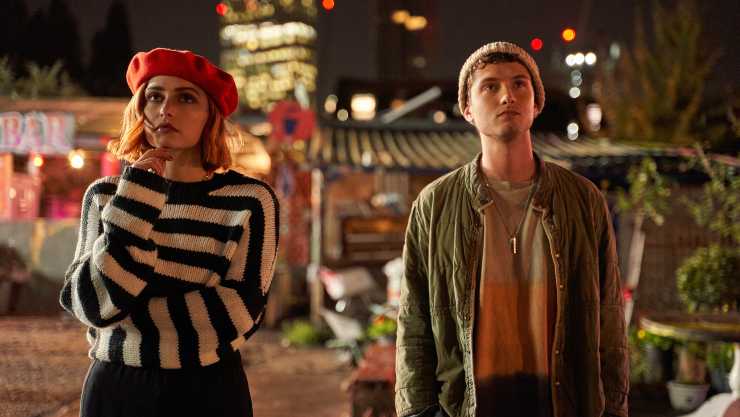 Twist falls flat on all counts.

Feeling more like a work straining for relevance than a coherent, captivating drama, the plot meanders and then lurches forward. Here it is. After an introductory East London killing and the hooded murderer’s theft of a significant envelope (a virtual MacGuffin), we’re off. Fleeing the police enraged over his graffiti sprayed on their van, Oliver, not so ingeniously called Twist, free runs into The Artful Dodger, called Dodge, and Batesey. Introduced to Fagin (Caine) Twist settles in and agrees to help Fagin’s ragtag street gang steal a valuable 1731 William Hogarth painting (A Harlot’s Progress) from an art dealer who betrayed Fagin years before, thus satisfying his desire for revenge. I’ll reveal no more to avoid any spoilers, not that the inane, disjointed details in any way prove satisfying.

And there’s more bad news. The heavy-handed, intrusive, wall-to-wall music destroys any subtlety or pleasure with at least fourteen selections competing for worst choice. Håvard Helle’s cinematography works hard to distract from the maddening lack of interest, adding unhinged camera moves—twisting, turning, rotating, flipping 360 degrees, with even fast forward moments that give the story a cartoonish style. The only viewers who will welcome this misguided mess are parkour and free running fans because there’s plenty of that with a vain attempt to add the energy otherwise absent. Even here, however, the editing robs parkour of its athletic, acrobatic flow.

Actors do their best, trying hard to care, including Jude Law’s son Raff, Lena Headey, and Caine. The best elements are a couple gender switched characters, some psychedelic colors defining a couple scenes, a cute Doberman, and a mere ninety minutes running time. Beyond that, Twist is an opportunity bungled.