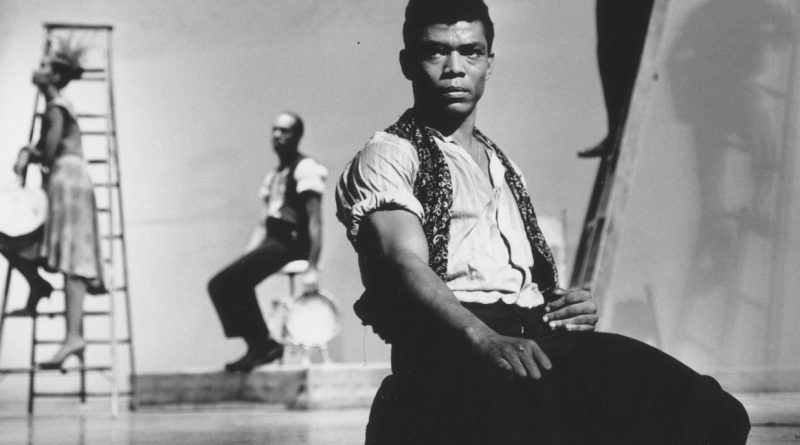 In a world where cinematic portrayals of Black pain and trauma are, unfortunately, still far more common than narratives about Black joy, Jamila Wignot’s captivating documentary Ailey is a welcome burst of celebration. This thoughtful chronicle of the life and work of groundbreaking, enormously talented dancer/choreographer Alvin Ailey centers Black pride, creativity, self-identity, empowerment, and achievement. And, of course, it captures the unforgettable performances that made Ailey and his company famous around the world. Wignot uses a treasure trove of vintage footage and audio clips to bring Ailey — who died in 1989 of an AIDS-related illness — back to vivid life for her film. She traces his life from an impoverished Southern childhood to his discovery of theater and dance as a young man to his ascent to world-renowned choreographer. Many of those who knew, worked with, and loved him over the years also contribute interviews, sharing their memories of a man who helped redefine the nature of modern dance.

Ailey’s monumental influence persists decades after his death, which the film ably demonstrates. Scenes from productions of Ailey’s landmark ballets — most notably Revelations, which was first performed in 1960 — are intercut with images of present-day Alvin Ailey American Dance Theater troupe members working on new pieces. The common thread tying all of this work together is Ailey’s focus on nurturing and mentoring Black performers. As he notes in one bit of archival voice-over narration, while he immediately loved the ballet as a boy, he was also very aware of the fact that none of the dancers he saw looked like him.

Thanks to Ailey’s contributions to the world of dance and culture, that has changed — but that doesn’t mean that the work he started is over. Far from it. However, as long as those who knew him and were inspired by him continue his legacy of melding activism with art, his dance will go on. — Betsy Bozdech

Sherin Nicole How do you honor Alvin Ailey? With body, with sound, with memory born of heritage flung out to the farthest reaches of what was and who we have yet to become. Filmmaker Jamila Wignot chose memory for Ailey, her documentary in praise of the American dance icon, our Black-American dance legend. In doing so her documentary encompasses all of the above—and it is we who are moved.

Marilyn Ferdinand Fimmaker Jamila Wignot has such command of her art that she’s been able to make a documentary in such sympathy with its subject, Alvin Ailey, that we feel as though we understand him from the inside out. This quasi-experimental film that pieces together historical footage, archival footage of Ailey’s works and press interviews, reminiscences of people in his life, and a present-day dance in the making presents a biography unlike any I have ever seen. Read full review.

Nell Minow: Ailey is the story of a man, an activist, and a visionary, but ultimately it is the story of an artist, and the eternal struggle between creativity and commerce. And it is fitting that the most powerful moments are the dances he left behind, still as vibrant, still both ever-new and always-eternal in expressing loss, longing, pain, and the resilience of the human spirit.

Pam Grady: Dancers and choreographers Judith Jamison and Bill T. Jones are among the witnesses on hand to describe the genius of dance giant Alvin Ailey in Jamila Wignot’s masterful documentary. Gone now for over 30 years, Ailey himself, in archival footage and recordings, makes the biggest impression as the story of how a poor Black child born in segregated, Depression era Texas rose to become a towering figure of the 20th century. In relating Ailey’s story, Wignot also spins the history of his times as he took an active role in the civil rights movement and used his art to shine a light on Black culture. But she also makes a stunning case for Ailey’s relevancy even now in glorious footage of the current Alvin Ailey American Dance Theater troupe making his legacy manifest with power and grace.

Loren King Director Jamila Wignot blends performance, poetry and social consciousness in her documentary Ailey, about modern dance legend Alvin Ailey. Wignot crafts an impressionistic portrait of the artist and his time that’s reminiscent of the revelatory I Am Not Your Negro, the 2016 film about iconic writer James Baldwin. Read full review.

Leslie Combemale Anyone who knows dance knows Alvin Ailey, but Jamila Wignot goes deep in exploring the many facets of the man who changed dance forever, politically, spiritually, and culturally. His dancers speak about the freedom he gave them to dance, and the way he elevated all those who worked with him with in such a respectful and loving way that it is impossible to remain unmoved. Dancer George Faison, who worked with him between 1966 and 1970 shares, “Alvin entertained my thoughts and dream that a Black boy could actually dance. It was a universe that I could escape to that allowed me to do anything that i wanted to do.” Wignot doesn’t shy away from the sadder, more challenging aspects of Ailey’s life, which prove that genius is not enough comfort when an artist feels truly alone. Even when he got sick with HIV/AIDS, he didn’t identify himself to the public as a gay man, and it made his death a lonely one. Ailey is essential viewing for dancers and artists, but will also fascinate lovers of good biographies.

Jennifer Merin Jamila Wignot’s compelling and comprehensive documentary, Ailey, not only chronicles the life and loves, career and choreography of the incomparable Alvin Ailey, but also plumbs the depths of the socio-political milieu in NYC and across the US from the 1950s onward. All hail Ailey! This inspiring documentary is a brilliant tribute to an iconic creative force in American cultural history.

Sandie Angulo Chen: A gripping chronicle of pioneering dancer-choreographer Alvin Ailey’s life and career. Through extensive interviews with an impressive roster of dancers and proteges including the preeminent Judith Jamison, Bill T. Jones, George Faison, and current Ailey choreographers, filmmaker Jamila Wignot demonstrates the paradigm-shifting, transformational impact that Ailey had on modern dance, and on elevating Black voices and bodies through his visionary dances. This is a must-see documentary period but in particular for anyone interested in the history of dance and/or the contributions of Black artists to the fine arts.

Liz Whittemore Jamila Wignot’s new documentary Ailey is a revelation. Alvin Ailey is one of the most revered choreographers of all time. What we didn’t know about his personal life, we unknowingly saw in his work. Each one of his choreographed pieces is a story, a history lesson, and living, breathing emotion. The film utilizes archival footage from Ailey’s career, the dancers he admired, as well as intimate sit-down interviews with his friends and colleagues. One of the most evocative elements is the creation of a tribute piece for the 60th anniversary of his studio. Alvin’s impact on everyone around him shaped not only dance history but artistic politics in ways we’re still learning about. As a dancer since the age of 3, this documentary spoke to my very soul. It celebrates the essence of being a dancer and all the complexities that come along with it. It shows the audience how powerful dance is. Ailey will make you stand up and cheer. It will catch you off guard. You will find that while experiencing this film, because it is an experience, that you have moments where you’ve stopped breathing. Ailey evokes a visceral joy.

Cate Marquis Even if you know little of modern dance, you likely have heard of Alvin Ailey and his American Dance Theater troupe. Jamila Wignot’s fine, beautifully constructed documentary Ailey starts with Ailey’s famous choreography, presenting archival clips of his fluid, beguiling and inspiring dance pieces set to gospel and blues. These hypnotic images are interspersed with shots of the contemporary Alvin Ailey American Dance Theater troupe rehearsals and interview footage of other great choreographers and dancers praising the work of this great American icon, whose works are both American and specifically Black. Ailey’s works are universally accessible, but drawn from Black culture and Ailey’s personal experiences growing in the rural South. Having hooked the audience on the sheer jaw-dropping beauty of Ailey’s works, director Jamila Wignot goes on to dive deep into Ailey’s work and life, exploring the cultural and personal expression in his works, and its sociopolitical commentary, through personal remembrances of this ground-breaking artist. It is a wonderful documentary, a stunning achievement of film-making and a must-see experience.