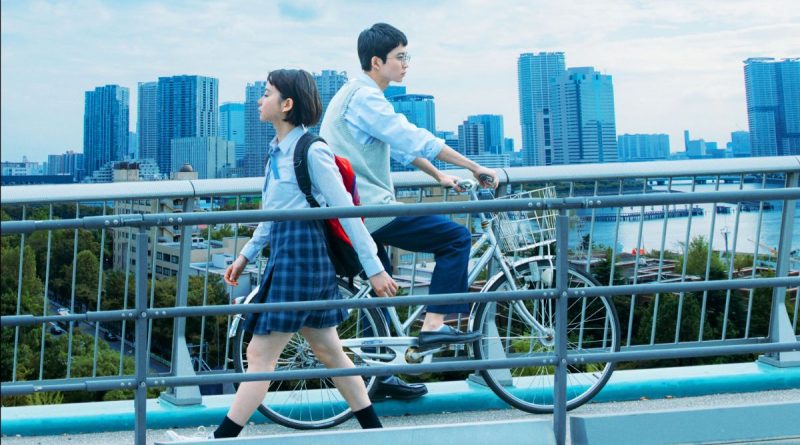 With its North American premiere at the 25th Fantasia International Film Festival in Montreal, Tokyo-born director/writer Natsuki Seta adds to her growing list of feature film credits that she has steadily helmed since 2011 with her latest, Georama Boy, Panorama Girl. The smell of teen spirit here is decidedly wholesome in this romantic coming-of-age tale that fluctuates between that of a love triangle and the story of (maybe) star-crossed lovers.

The two eponymous characters are Kenichi (Jin Suzuki) who lives with his sister as his mother lies ill in hospital. With his life in chaos, the seventeen-year-old kicks off the film with a bang, quitting school and snogging his male teacher on the way out; less, we learn, as a sign of any kind of sexual awakening we might track on Kenichi’s journey throughout the film, but more as an act that makes his return to school at the behest of the teacher who has begged him to stay practically impossible. Haruko (Anna Yamada) is almost seventeen, but seems much younger than the nerdy Kenichi.

With her giggling school friends, they sing and daydream of Disneyfied visions of romance and true love, and when she and Kenichi finally cross paths she decides he will be the focus of her amorous attention. Kenichi, however, has his eye set on more experienced prey, the glamorous Mayumi (Misato Morita) whom he soon learns is a sex worker. While he struggles with her choice of career, throughout their complex relationship, as she tells him, she doesn’t charge everyone she has sex with – particularly people she likes. As Haruko and Kenichi learn that the path to true love is far from an easy one, the question remains: will our Georama Boy and Panorama Girl get it together?

Adapted from the manga of the same name by Kyoko Okazaki, that this film is inspired by the same person who authored Helter Skelter that was adapted into a dazzling feature film by Mika Ninagawa in 2012 does come as somewhat as a surprise; little of the electricity of Okazaki’s previous screen adaptation is really here at all, although Georama Boy, Panorama Girl is certainly competently made. And nothing about the sweetness and delicacy of this teen romance would really for one moment indicate that Seta’s primary mentors for her graduation film A Letter from Elsewhere (2008) where the legendary Kiyoshi Kurosawa and Takeshi Kitano, iconic cult filmmakers whose filmographies as a whole feel decidedly different from what Seta does here with Georama Boy, Panorama Girl.

Set in Tokyo and its outskirts as renovations for the 2020 Olympic Games were taking place, this inadvertently dates the film in a way the filmmaker could never have possibly imagined, and in more ways than one this feels like a film from another time, for better and for worse. As escapism, this is a solid romantic drama for a young adults that ticks all the boxes it needs to, weaving its emotional ups-and-downs with the carefully balanced “will they hook up or won’t they” question that runs throughout.

Seta’s handling of Mayumi as a sex worker, however, is at times almost uncomfortably archaic – absolutely there may be cultural differences at stake here, but that the flat, cliched depiction of Mayumi as a crude, cruel manipulator (she is even called a “femme fatale” in the press kit) does not present a particularly nuanced portrait of contemporary sex work. Georama Boy, Panorama Girl is not going to set the world on fire, but it is certainly a charming if at times reductive portrait of life and love amongst the young in contemporary Japan.