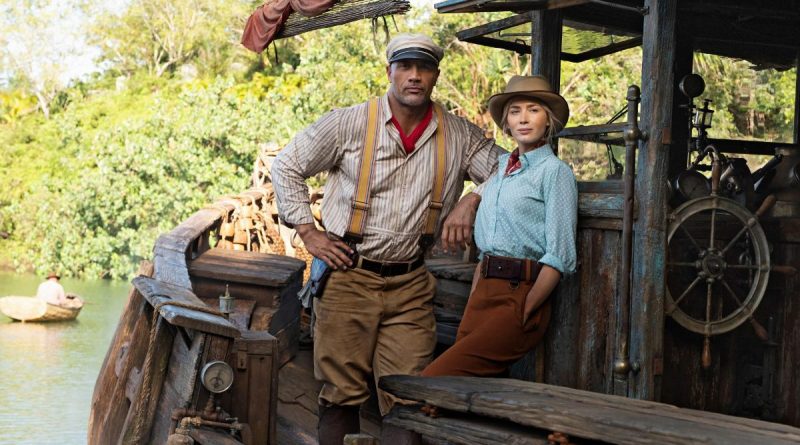 Whoever pitched Disney’s new feature Jungle Cruise must have been a master of hyperbole. “It’s The Mummy meets Pirates of the Caribbean meets African Queen, but imagine Katherine Hepburn as a younger, smokin’ yet independent English hottie, and add the highest paid actor in the world.” If there were ever a final argument for ‘there’s nothing new under the sun’, Jungle Cruise would be it. Potential viewers have to ask themselves, ‘to what extent does mindless entertainment trump inventiveness and originality?’ What can be expected from a film derived from a Disneyland ride? Those who love Pirates of the Caribbean, both the ride and the film series, would say to expect a lot.

A fantasy adventure that takes place during World War I, Jungle Cruise features unflappable riverboat captain Frank Wolff (Dwayne ‘The Rock’ Johnson) who is asked by intrepid British scientist and adventurer Dr. Lily Houghton (Emily Blunt) who comes with her land-loving, ineffectual, and overdressed brother MacGregor (Jack Whitehall) in tow, to journey in his boat in search of a tree with magical powers. Tripping them up are ever-more-sunburnt harbormaster Niro Nenolato (Paul Giamatti), and rich German aristo Prince Joachim (Jesse Plemons), who also seeks the magic tree, and is somewhat inexplicably chasing them in a submarine.

Obviously the ride down an African river with a boat skipper and a plucky dame being chased by a sub is straight out of African Queen, notably sans Humphrey Bogart and Katherine Hepburn. As for references to other films, there are dead that come back to life (PoC), bees driven by hell (The Mummy), action in which an explorer must fight against deadly foes (a gender-switched The Mummy), with a bumbling brother tagging along (The Mummy). There are many other references that would spoil the story, but suffice to say you’ll find them in every scene. At least the filmmakers come by their African Queen inspiration honestly. When creating the original ride, Disney imagineer Harper Goff frequently referenced the film. It’s why they used a steamer like the African Queen as source material for the design in both the ride and the new film.

The action trundles along for most of the two hour and seven minute running time, offering very little downtime. Both the leads are game to make the best of the silly premise, and fans of either or both actors will enjoy how well they work together. Families will no doubt enjoy watching this amalgam of fan favorite action films. As to the trouble spots, they are many and myriad. The German represents laziness of character design, entering into the realm of caricature, which may be intentional. Regardless, it doesn’t work. Especially problematic is the way MacGregor portrays a negative stereotype of the foppish, germaphobic gay man for most of the movie.

Beyond all that is the fact that there are nearly no women represented below the line in the production of Jungle Cruise, and certainly not as heads of departments. No editor, production designer, costume designer, cinematography, composer…you get the idea. Disney, stars Johnson and Blunt, and producer Dani Garcia, not to mention director Jaume Collet-Serra, should have fought harder for at least a fraction more representation from HALF THE WORLD’S POPULATION. In 2021, there’s no excuse for that, and consumers should demand more from studio films.

I’ve been torn quite a bit lately about how to rate a film that offers pure entertainment value, even if it is wildly derivative. if one enters into the experience with low expectations, that might be just perfect viewing given what the world has been through in the last year. There’s an argument to be made that a movie that’s just pure, unfettered fun, regardless of whether it also offers other redeeming qualities, is exactly what’s needed in this moment in US and world history. There’s an opposing argument that says we should hold ourselves to a higher creative standard so we are lifted up rather than just soothed or placated. In this case, as fun as Jungle Cruise is, I’ll air on the side of expecting more, given the dearth of female representation below the line. See it only if you agree with many around the world that Dwayne Johnson and Emily Blunt can magically make your troubles fade for two hours. If you expect more, save your time or money until you can visit a Disney theme park and take the original ride again.