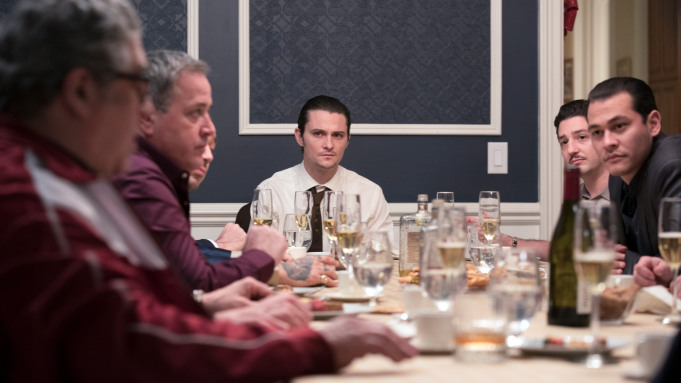 There may be a great deal of competition in this category, but I nominate Jimmy Giannopoulos’ The Birthday Cake as the worst mob movie ever made!

Set in Brooklyn, it begins with the 10th anniversary of Giovanni’s father’s death. Giovanni (Shiloh Fernandez) dutifully goes home and dons a suit to continue the family tradition of delivering the titular cake, baked by his widowed mother Sophia (Lorraine Bracco), to the home of his Uncle Angelo (Val Kilmer), the local Italian/American Mafia boss.

Festive lights mark the month as December, near Christmas, as Gio makes a couple of stops, including a brief flirtation with Diane (Clara McGregor) and an interlude in church with friendly Father Kelly (Ewan McGregor).

Everyone is trying to locate Gio’s bad-tempered cousin Leo (Emory Cohen), recently released from prison and perhaps involved with drug-dealing, which alerts the FBI to inquire his whereabouts.

Then there’s a memorable ride with a Puerto-Rican taxi driver (Luis Guzman), along with a cameo appearance by Marla Maples (Donald Trump’s ex-wife).

(Unable to use his voice because of an ongoing battle with throat cancer, Val Kilmer’s lines are subtitled, but his presence is still charismatic).

Director/composer Jimmy Giannopoulos wrote the cliché-riddled screenplay with Diomedes Raul Bermudez & Shiloh Fernandez. He’s linked romantically with Scottish model/actress Clara McGregor, which may explain why he was able to cast her father Ewan McGregor, who, apparently, filmed only three days to complete his pivotal role.

(A while ago, Clara staged a public spat when Ewan divorced her mother, Eve Mavrakis, to be with his Fargo co-star Mary Elizabeth Winstead, with whom he now has a child.)

Gossip aside: If you wanna see a coherent crime movie, try one from Guy Ritchie or Martin Scorsese.

On the Granger Gauge of 1 to 10, The Birthday Cake is a tediously nonsensical 2, available on DVD and streaming on Prime Video, Apple TV and Vudu. But don’t waste your time.