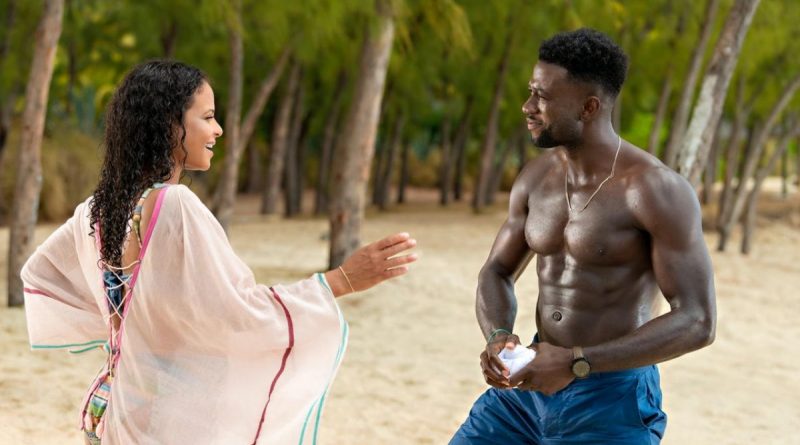 Resort To Love is a lovely little boomerang film you need to see. Remember Moonstruck? The right woman was engaged to the wrong brother. The same thing here, except this modern and fun rom-com is set in a far prettier place than Cher’s classic falling in love flick.

Thanks to the lead star Christina Milian, she is perfection in this film that should elevate her cache in Hollywood. Her Erica is lost both vocationally and romantically, and she is looking for closure from a recent breakup. Thanks to a savvy social media whiz-bang pal, she winds up booked in a fancy-schmancy resort in Mauritius, as far away from New York as a singer can escape failed engagement.

The twist is her ex-fiancé Jason (Jay Pharoah) has booked his wedding party there, and Erica is the hotel’s wedding singer.

Erica has a great connection, Amber, who booked her in this Indian Ocean paradise to escape her failed almost wedding memories. In a series of unusual events, Eric meets Caleb King, a strapping hunk and former special forces man who is the brother of her ex Jason.

This crazy small world coincidence would be okay if you could get out of the situation and getaway, but they are on a small island off Madagascar, and the die is cast. Jason and Erica must grit and bear it as his dotty new bride-to-be Beverly (Christiani Pitts) are all aflutter with her dream wedding, and her super high achieving locked into her cellphone sister is close by and in tow, as Jason and Caleb’s parents en route.

Awkward! Milian is a living doll and does her best in this fun crossed wires situation to keep her calm, be a class act and keep Jason from the fire of discovery.

Except, Jason and Caleb’s mother arrives. Jeryl Prescott is THAT mother. She is a stone-cold scene-stealer and total riot. Playing the quintessential mother-in-law nightmare trope-alicious diva and sniffs at any woman who her sons make choose as a bride. But then, she spots Erica, and the jig is up.

The outcome? Not what you would expect.

No more spoilers, but enjoy the excellent and effervescent writing of Tabi McCartney and Dana Schmalenberg, who have penned flawless chemistry between Milian and Sinqua Walls as Caleb King. The right brother will win Erica’s heart. Getting to that conclusion is a frothy pineapple and umbrella cocktail laced delight.

The gorgeous island of Mauritius will become a bucket list destination thanks to this lovely little unassuming film that does what Hallmark films attempt to do, but 1000 times better. Resort To Love will engross you in a romantic yarn that is neither cookie-cutter nor trite.

Hats off to Milian for her pitch-perfect take on Erica, and for making her character such a likable and relatable protagonist who doesn’t settle and lets the universe help her find her perfect soul mate. Hooray for love and waiting to find the right fit.

This is what escapist and fun TV and film are all about. Brava to all, including executive producer Alicia Keys.