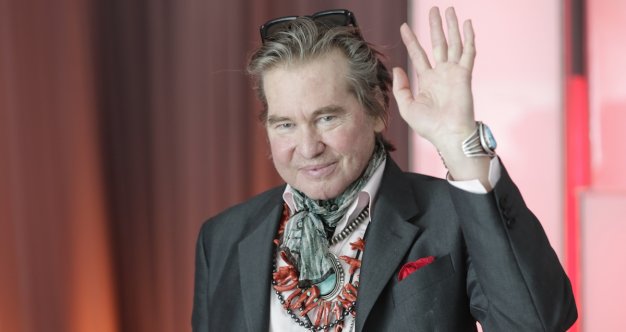 Before he earned the nickname “Iceman” and became a 1990s icon as Batman, Val Kilmer loved goofing around in front of and behind a camera. He’s collected a treasure trove of footage throughout his life that the documentary Val pieces together into an immersive narrative about his love of art, acting, and family.

Available on Amazon Prime, Val also shows Kilmer, now 61, after beating throat cancer a few years ago. He covers a hole from his tracheostomy to speak; his son, Jack Kilmer (Body Brokers), handles the first-person voiceover of his dad’s younger days, sounding remarkably like him in the process.

First-time directors Ting Poo and Leo Scott also use Val to give voice to Kilmer’s desire to express himself. (Kilmer and his daughter, Mercedes Kilmer, are two of several producers on the project.) In recent years, he’s thrown himself into painting and other visual arts, establishing HelMel Studio & Gallery in Los Angeles, a display space where he also mentors other artists.

“It’s like I’ve lived my life, and it’s sort of all in these boxes,” he explains, indicating thousands of hours of home movies, behind-the-scenes moments on set, and video diaries. “But what is part of the profound sadness is that I know it’s incomplete.”

Kilmer and his older brothers, Wesley and Mark, used to create their own films at the family’s home in Chatsworth, California, adjacent to Hollywood. (Teeth was the title of their version of Jaws.) The Kilmers lived for a while at Roy Rogers’s old ranch, which his father, a real estate developer, bought. Eugene Kilmer took young Val to the Adam West-era Batman set, where the boy sat in the Batmobile. It’s no wonder the acting bug struck.

Tragedy did, too. At fifteen, Wesley Kilmer drowned in the family’s jacuzzi during an epileptic seizure. Val Kilmer recalls that his family was never the same afterward. Wesley’s artwork, he notes, hangs in the background of one of his scenes in 1985’s Real Genius.

Val peppers such insider trivia throughout, as well as his intense prep for various roles. Trained in acting at Juilliard, Kilmer made his film debut in 1984’s Top Secret!, an “over-the-top rock-musical spy thriller parody” where he learned to play the guitar, but the filmmakers preferred that he fake it. He thought the script for 1986’s Top Gun was “silly,” though it launched him to stardom and gave him a nickname that every pilot he’s met calls him to this day. (Kilmer is scheduled to return as airman Tom “Iceman” Kazansky, now an admiral, in Top Gun: Maverick, scheduled for release in November.)

Kilmer says he asked the art department on 1993’s Tombstone to fill a bed with ice for his final scene as real-life gunfighter John “Doc” Holliday so that he could feel some pain and discomfort like the real Holliday, who died of tuberculosis. Having dreamed of being Batman, he signed on for 1995’s Batman Forever without reading the script and wound up feeling isolated, unable to hear in the costume’s cowl. Making Heat immediately afterward, he says, was “pure joy.”

Val doesn’t shy away from how his pursuit of a true performance was difficult on those around him. His preparations to play rocker Jim Morrison in 1991’s The Doors, for instance, were “total hell” on his former wife, Joanne Whalley, whom he met making 1988’s Willow. “Home was just another place to rehearse,” he says.

Yet Val includes sweet and funny moments, too, such as Whalley being cheeky with their baby girl and Kilmer and their son dressed as Batman and Robin before flashing back to his role as the Caped Crusader. Not for nothing does the film show him as Morrison musing about being “a sensitive, intelligent human being but with the soul of a clown.”

Val at times includes clips without context, such as some footage circa 1997 where he cuts his hair with a knife while saying that when signing a contract for a role, “It’s your actual life you’re agreeing to forfeit.” (He was fresh off a divorce and the disaster that was The Island of Dr. Moreau at that point.) It’s also poignant, showing Kilmer with his children and fans. When he visits a Comic-Con in recent years and feels ill, for instance, aides whisk him away so he can vomit and rest before returning to sign autographs.

Some people might think it’s low to revisit his popular roles. “I don’t look great, and I’m selling basically my old self, my old career,” he says after a showing of Tombstone in Texas. “But it enables me to meet my fans, and what ends up happening is I feel really grateful rather than humiliated because there’s so many people.”

Overall, Val is an engrossing dive into one man’s creative drive and how through art he believes he has more to give.