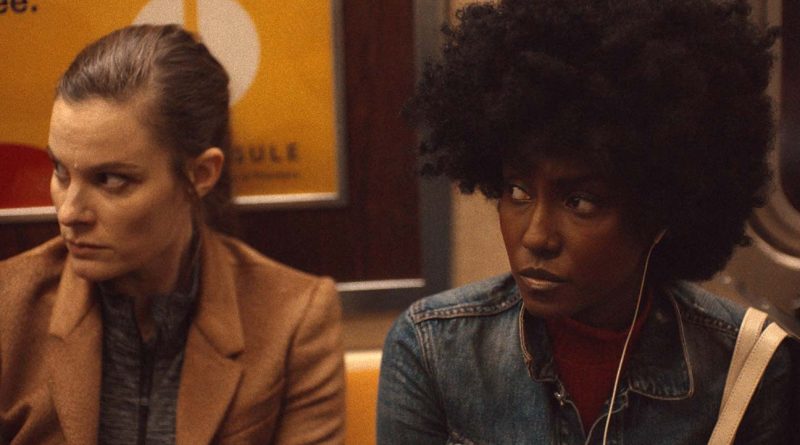 The stories of four disparate women converge after a violent encounter on a subway car in the new anthology drama Materna, directed by David Gutnik. Exploring a thematic connection to motherhood, each diverse and separate story dives into how “difficult” and demanding mothers shape their children and their attempts to break away from generational influence.

Introducing the four female characters in a brief moment during an escalating incident involving a belligerent white man (Sturgill Simpson) on a New York City subway car, each chapter of Materna unfolds as we see into the women’s lives and what they have on their minds during their subway journey.

First, we are introduced to Jean (Kate Lyn Scheil), a woman in her mid-to-late 30s who makes her living working on a mysterious virtual reality project. She has little interactions with the world outside her loft with the exception of her mother who phones her repeatedly to encourage her to freeze her eggs or find a boyfriend before it’s too late to have a baby.

Next, we meet Mona (Jade Eshete), an Afro-American actress who is coming to terms with the end of the show that helped her make a name for herself, all while answering the nagging texts of her mother. But she also has a mother figure to deal with in the form of an older actress as her challenging scene partner, who beings to act a proxy for Mona’s issues with her mother.

Mona’s story is followed by Ruth (Lindsay Burdge), a wealthy conservative Jewish woman whose political beliefs on Black Lives Matter and police brutality are at odds with her liberal activist younger brother (Rory Culkin). When Ruth’s young son Jared (Jake Katzman) gets in trouble for bigoted actions at school, she is forced to take a look at how she and her “all lives matter”-spouting husband (Michael Chernus) are parenting their son.

Finally, the strongest and most compelling story in the quartet belongs to Perizad (Assol Abdulina) who returns to her home country of Kyrgyzstan after a death in the family. Home with her grandmother and mother (Zhamilya Sydykbaeva and Jamal Seidakmatova), the reserved Perizad holds her mother responsible for the death as the family drama slowly unfolds.

Each narrative is contained within its own story which is both a blessing and a curse for Gutnik. The two strongest chapters bookend the weaker stories, with Ruth’s tale being the least-developed. In this story, Burdge seems to struggle to deliver the bigoted messaging, never coming across as a character who truly believes the words she is saying, ultimately leading to her debates with Culkin’s character lacking a punch.

The standout star and story of Materna is easily Abdulina, who not only shares a co-writing credit (along with Eshete) but won Best Actress at the 2020 Tribeca Film Festival for her role. Moving the story and production to Bishkek, Kyrgyzstan and telling it in Russian, the final story of Materna is the only one that leaves viewers wanting more. Perizad’s family drama could easily captivate audiences for an entire feature-length film as the complicated cultural dynamics of what it means to be a woman in Kyrgyzstan unfolds.

In the end, Materna’s strength lies in unifying culturally diverse stories and while Gutnik makes some choices that aren’t always successful, the film is mostly effective when it comes to exploring the themes at hand as he offers what is ultimately a unique and refreshing perspective on both motherhood and womanhood.