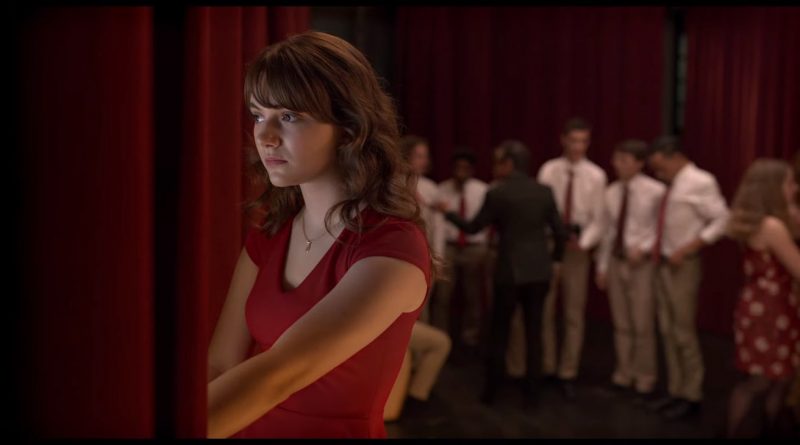 CODA is a coming-of-age story with a twist, given that its title stands for a “child of deaf adults.” Set in Gloucester, Massachusetts, this crowd-pleaser offers plenty of emotional and humorous bait as we meet 17-year-old Ruby (Emilia Jones), her non-hearing parents (Marlee Matlin and Daniel Durant, a sweetly salty pair) and hunky deaf brother (Troy Kotsur). Alas, our heroine is not so keen on her school work, partly because she is required to be an interpreter for her loved ones as well as an early-rising participant in the family fishing business.

But when we hear Ruby soulfully belt out the Etta James classic, Something’s Got a Hold on Me that plays on the radio unheeded by her family as they tend to their catch of the day, you can tell she has an innate gift. That leads her to try out for her school’s chorus, where she eventually impresses the choirmaster, played by Mexican comic Eugenio Derbez, who puts his usual farcical antics aside as his Mr. V. focuses on Ruby and her shy male counterpart Miles (played by Ferdia Walsh-Peelo, the Irish charmer from 2016’s Sing Street). While the pair are initially uneasy about practicing their assigned concert duet, the Motown classic You’re All I Need to Get By, the twosome eventually get in sync when they build up the nerve to jump into a lake together and eventually share a kiss.

Meanwhile, ripples of Dirty Dancing and Fame bob by while Ruby’s parents try to fend off restrictions that cut into the profits of their fishing sales. Meanwhile, their daughter is torn between chasing her dream of auditioning for the Boston’s Berklee College of Music and continuing to speak for her parents. When they see her perform with the choir – and the reaction from the audience – they realize the emotional effect that that she has on the crowd.

But writer-director Sian Heder saves the best for last as Ruby performs Joni Mitchell’s Both Sides Now. With Mr. V accompanying her on piano and her parents in attendance, she sings and signs the lyrics, allowing her parents to feel the power of the song. At this point, a pile of tissues nearby would be advisable.

Based on the 2014 French-language film La Famille Belier, which takes place on a rural dairy farm, Heder wisely decided to switch to the coastal region of Massachusetts, where she spent her summers growing up. Her choice injects an earthy and personal authenticity to what happens on the screen. Also give her props for hiring deaf actors and including others in the deaf community on her set.

Matlin, as always, is a joy to watch. But if there is a MVP in this Sundance Film Festival breakout hit and trophy winner, it clearly is the English-born Jones, who took singing lessons and learned American Sign Language over nine months before filming began. And whoever decided that her down-to-earth character would naturally wear tomboyish flannel shirts, overalls and sweatshirts while eschewing makeup and a fancy hairdo deserves their own prize.