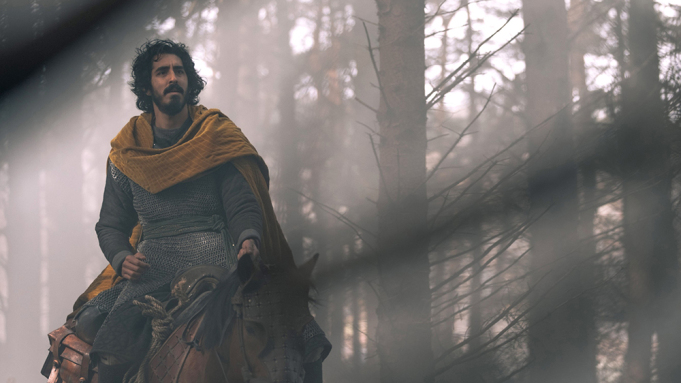 Years ago, as an English major, I had to read a rather long, boring 14th century epic poem from the Arthurian legend called Sir Gawain and the Green Knight. Now, visual storyteller David Lowery has revitalized and enhanced this chivalric romance.

On Christmas Day in the court of aging King Arthur (Sean Harris) and Queen Guinevere (Kate Dickie), regal Arthur summons his nephew Gawain to sit beside him at the feast, expressing regret that he hasn’t spent more time with him. Guinevere reassures the lad that, someday, he will take his rightful place at the Round Table as the “boldest of blood and wildest of heart.”

Suddenly, a towering, ominous figure – resembling half armor-clad man and half-gnarled tree – gallops in on horseback. The Green Knight (Ralph Ineson) challenges any nobleman to strike him with his mighty sword on the condition that – one year hence – he will return the blow in his Green Chapel.

When no one else volunteers, Gawain accepts, decapitating the Green Knight, who promptly retrieves his head and reiterates the young man’s promise to meet him again the following Christmas.

“I fear I am not made for greatness,” insecure Gawain muses before his departure across the wintry landscape in the murky mists of time. But King Arthur believes in his potential, even as Gawain continues to doubt himself.

On the road to meet his destiny, Gawain must face a series of fearsome trials, tribulations and temptations as he gradually learns the true nature of chivalry.

On the Granger Gauge of 1 to 10, “The Green Knight” is an enchanting 8, playing in local theaters.