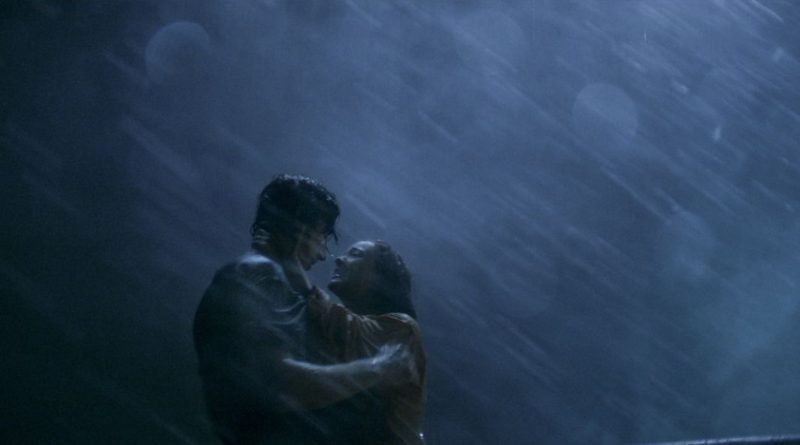 Part fantasy, part cheeky treatise on modern life, Annette is very much a film of extremes, one that struggles to reconcile its differences. Director Leos Carax deservedly won the Director’s prize at Cannes– this is certainly an athletic effort on his part – but Annette remains a frustrating experiment in form and content.

Annette is the brainchild of musicians Sparks (the duo Ron Mael and Russell Mael) who originally conceived it as a concept album. Story and music remain straightforward enough in this partnership, a fact that thankfully allows room for Carax to exercise some artistic dexterity.

In truth it is the simplicity of the concept and the score which is at the heart of the film’s main problems. Perhaps most frustrating is the uneven score which contains only a few memorable songs while mostly remaining talky and repetitive.

Visually Carax does his best to conjure the cinematic equivalent of the fantastical to lift this basic tale of a deeply mismatched but even more profoundly passionate couple’s story into something transcendent. Adam Driver and Marion Cotillard star as a celebrity couple who fall in love and have a child, Annette. Not so subtly, she is a literal puppet who possesses a strange and wondrous gift.

Separately, the couple exist in worlds of extremes. Driver’s Henry McHenry is a standup comic, bitterly spewing truisms at his adoring audience, a kind of everyman who sees and expounds upon life’s seedier side even while he is basking in it. Cotillard’s Ann Defrasnoux is an opera singer, a vision of fragile femininity, basking in the world of high art and illusion, dying so beautifully (as Henry so pointedly jokes) at the end of every performance like every famous opera heroine should.

The underlying social commentary evident in Annette may be refreshingly (and even hilariously) incisive but too much is sacrificed as a means to that end. As much as the film is self-reflexive, with a playful opening song in which Sparks reveal their own self-conscious intentions as well, the farcical swipes at contemporary society are no match for the grave flaws in this oversimplification of the foundations of good storytelling.

Whole storylines and even characters just disappear, subsumed by the greater goal of sarcastic wit. Cotillard’s Ann is not just symbolically victimized in the operas. There’s also a hint of a character in a love triangle – Simon Helberg’s surprisingly refreshing Conductor – but he doesn’t last long.

In fact, as soon as Annette wades into the topic of toxic masculinity, we see its effects on the film. Adam Driver brings this astonishing physicality and animalistic energy to his performance as Henry that becomes symbolic of the actual drive of the film. This character devours the others.

While it’s fascinating to watch male creators and the lead actor dive so deeply into the subject of toxic masculinity, there’s a necessary balance that is lacking. With both sides present but unequal, it’s like one extreme pushed out the other. That’s an unsatisfying conclusion that even the magical ending can’t fix.