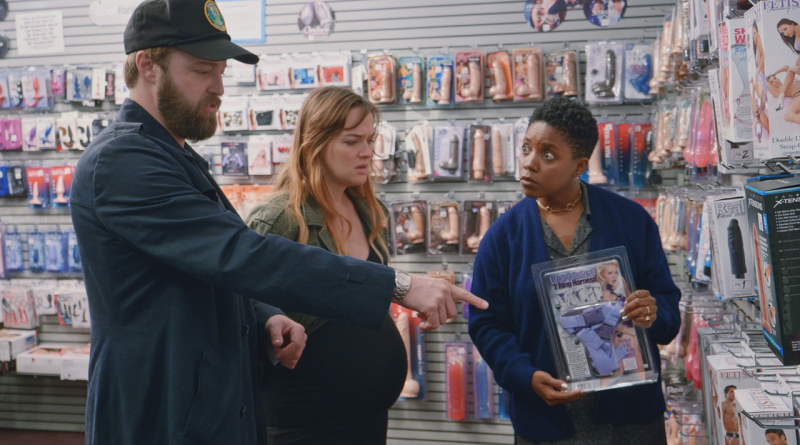 A low-key comedy about young parents-to-be who overthink and -talk everything, Fully Realized Humans is undermined by the fact that Jackie (Jess Weixler, who was eight months pregnant when the film was shot) and Elliot (Joshua Leonard)–the duo of actors who are both the stars and the filmmakers (they co-wrote and he directed)–is that they’re insufferable, and not in a particularly funny way. They’re like those friends of friends who seem as though they’re probably nice-enough people but never stop talking long enough for you to find out, the kind you ditch at parties by going to the kitchen for ice and not coming back.

To be fair, Fully Realized Humans is sometimes funny: Jackie’s baby shower–the movie’s second scene–is masterful, a boisterous celebration of friends sharing lurid pregnancy, childbirth and parenting horror stories guaranteed to scar any first-time mother-to-be half to death. And Wexler and Leonard have an easy rapport that makes them genuinely likeable… at least until it becomes clear that Jackie is a pushy, neurotic whiner, Elliott is a doormat and they’re both tediously wed to their neuroses. While their patient doula, Maya (Erica Chidi Cohen) is impressively unworried about how they’re going to cope, they make the ill-advised decision to “shake it up” in remaining month before the baby arrives and they have to settle down and act like actual grownups… also known as people who’ve learned that “shaking things up” because you can’t think of anything more constructive to do is almost always a terrible idea.

So they go for it, from buying a strap-on to spice up their sex lives to shoplifting, graffitiing walls, trying to get one of Elliot’s friends to participate in a Fight Club scenario and going to a strip club for lap dances to scaring some poor ducks by chasing them with the aforementioned sex toy. Imagine Natural Born Killers played as a dumb joke… and yes, on some level the point seems to be that their quest to discover their inner wild things is silly and half-assed. But the fact that Elliot and Jackie are both self-absorbed and too immature makes it hard to laugh with or at them. The film’s best scene is its last, in which they finally sit down with their parents and have a serious talk about why they are the way they are, and that’s largely because the older actors playing the previously unseen parents bring to life fully rounded, complicated characters. Granted, their single scene is a long one; but they do more in 15 minutes than the movie’s stars and co-writers do in the preceding hour. As to the short, cutesy, stick-figure animated sequences used throughout to sum up Jackie and Elliot’s shifting emotions… they’re twee and pointless; there’s no need to belabor the point that they’re barely functioning adults, let alone fully realized humans.