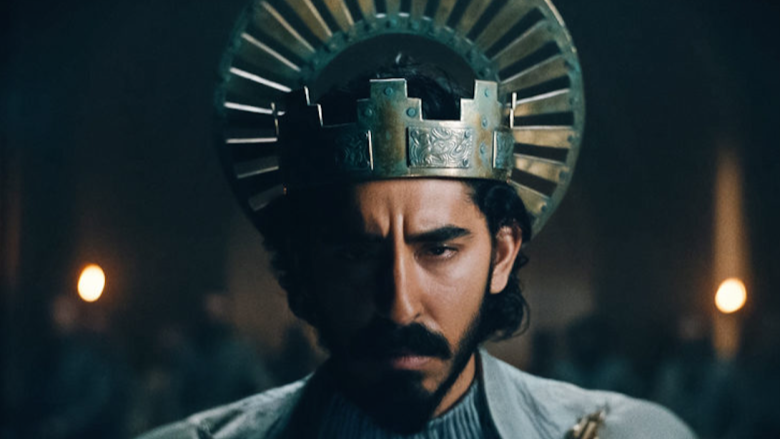 This film would seem to be ideal for English majors. Who else has read Sir Gawain and the Green Knight? The hero is King Arthur’s nephew, and the tale defines the chivalric romance with themes of honor and humility. The film is dark. Very, very dark. Also turgid and confusing.

The classic beheading story begins in Camelot in Christmastide. Knights are dining around the round table when an uninvited guest rides in armed with a battle axe. Both horse and rider are green. Kale green. The interloper challenges any knight to a Christmas game: Behead the Green Guy in exchange for his own beheading after wandering for a year and a day.

Gawain accepts. Whack. Off with the knight’s head. The knight swoops up his noggin and rides off. So, Gawain takes a gap year to prove his mettle. In that year, he meets a lady, also headless, and a couple in a castle, and a fox. Another lady kisses him thrice and gives him a green girdle with magical powers. When Gawain returns to Camelot (spoiler alert for the non-English majors), heads roll.

That’s the story. This film version (there was another in 1973) stays pretty true to the original plot. Dev Patel (Hotel Mumbai) plays the knight; Alicia Vikander (The Danish Girl), the lady; Joel Edgerton (Loving), the lord, and Ralph Ineson (The Witch), the title role. None do their best work in these woods, but that could be because director David Lowery wrote the incomprehensible script.

There are a couple ways to enjoy “The Green Knight.” One is simply not to go. Do not hunt for your old Norton Anthology of English Literature — just forget about the source material and get on with your life.

If you must go, though, take a light — not a little Bic but a head lamp worthy of mining or performing serious surgery. Really, the entire production is impenetrably dark. Also, an anti-nausea pill will keep up-chucking at bay as Andrew Droz Palermo’s cameras twirl and swirl. Also, take ear plugs to muffle Daniel Hart’s music as it tattoos on the old ear drums.

The Green Knight issues a challenge to all viewers: if you can sit through this thing without longing to have your own head lopped off, you deserve to be knighted. But don’t be greedy: once a knight’s enough.