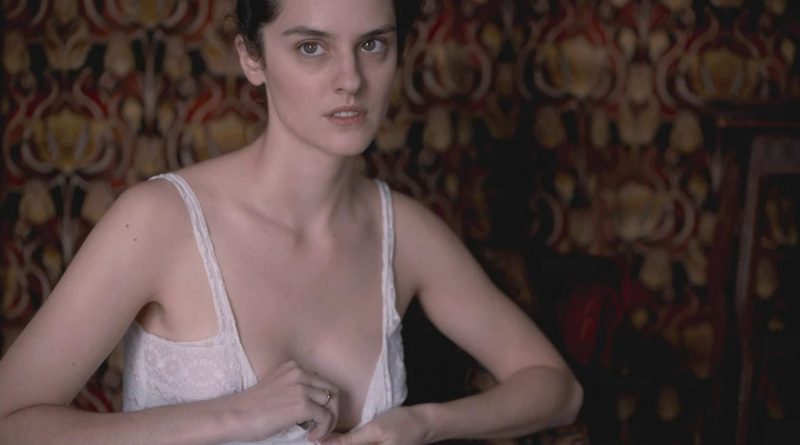 Let me tell you about the people around whom this film is centered. Henri de Régnier was a French author who wrote a number of acclaimed books of poetry and a series of successful novels. He married Maria de Heredia, a highly regarded poetess and novelist, who often wrote under the nom du plume Gerard d’Houville. She had several lovers, women rumored among them, but had a long term affair with poet Pierre Louÿs. Louÿs was so celebrated that he was first made a Chevalier and then an Officer of the Légion d’honneur. A poet and writer renowned for lesbian themes, he became famous as the translator of a collection of erotic memoirs called Songs of Bilitis, in which he translated the 143 poems of a supposed Greek courtesan and comtemporary of Sappho. Not long after its publication and embrace by the French literary elite, imposter Louÿs revealed he had invented Bilitis and written all the poems himself. That revelation did nothing to tamp down his celebrity. In fact, his friend Claude Debussy adapted three poems from Songs of Bilitis for voice and piano. Louÿs was also a passionate early adopter of the camera, and one of the first amateur photographers developing his own film, thereby making possible his fascination with posing naked women alone and with men in various states of undress.

That’s where the film Curiosa abuts much of the above history, although little of the most fascinating aspects of any of these people is represented onscreen. The film follows Maria de Heredia (played by Noémie Merlant) in her journey of self discovery, both sexual and emotional, not as she navigates the literary world, but as she plays the muse for Louÿs (Niels Schneider) in his artistic exploration. She’s married to de Régnier only for convenience and financial protection. A lot of coy smiles and surreptitious glances lead to photos of de Heredia in increasingly scanty dress, until finally she is posing herself in pictures highlighting her heart-shaped bum. She’s an early star of those ‘French Postcards’ you’ve heard so much about. If she is choosing to be the center of sexual attention, if it is her choice, why then is she navigating so safely within the construct of a patriarchal power structure? If filmmaker Jeunet means to build a story around a world more accessible to women, as the modern electronica-infused score would suggest, why not extend that to the ways in which de Heredia breaks into a male-dominated literary world, or in how she chooses to express her sexuality without regard to how the men around her see her?

The most egregious element in Curiosa is how real-life sex worker and famed photographic subject Zohra Ben Brahim is portrayed in the film. Jeunet portrays Brahim, much like Louÿs did in reality, in a highly exoticised way. That in and of itself isn’t a problem, if it is made clear in the movie that we are seeing her from the problematic perspective of Louÿs himself, as per his real-life quote about Brahim calling her his “little savage”. French-Algerian singer and actor Camélia Jordan does an amazing job in the short time she is onscreen, but she enters and exits Curiosa as a story catalyst. First she dances adorned with tribal jewelry and shows her comfort with her sexuality, being photographed while choosing men to engage with sexually. Then she has confrontations with a displeased and jealous de Heredia, only to disappear from the story entirely. Jeunet: don’t introduce a woman of color that actually existed in history but we know little about as a story point that just pushes the white folks’ stories forward. That’s the opposite of female empowerment.

None of these characters are particularly likable, with the exception of Zohra Ben Brahim, of whom we see far too little. While it’s true that the music, production design, costume, hair, and makeup are all first rate and the performances are good, Maria de Heredia proves to be little more than a cypher in the end, and it’s not likely that’s representative of history. Hopefully it’s also not what Lou Jeunet intended. A women of any era should be defined by more than just how they express themselves sexually. Maria de Heredia’s sexuality should be part of a larger picture that explores her in a holistic way. The writer/director seems to have forgotten that amidst all the sexy poses that parallel those left behind by these brilliant, fully-formed poets and writers. They deserve better.