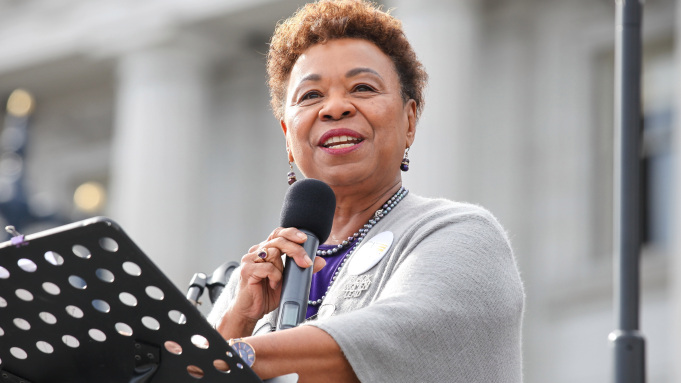 This documentary about Barbara Lee, the highest ranking Black woman in Congress, is so inspiring, I fully expect a future President of the United States to one day say she was motivated to run for office after watching it.

Directed by Peabody Award-winning filmmaker, Abby Ginzberg, the film features an eclectic group of celebrities, including actor Danny Glover, CNN commentator Van Jones, Pulitzer Prize winning author Alice Walker, and politicians from the late John Lewis to Alexandria Ocasio-Cortez and Cory Booker, all singing the praises of the California Congresswoman who has been fighting for racial and economic justice for more than two decades.

“The laws of this country have stacked the deck against women and people of color,” Lee says in a speech at the beginning of the film. Determined to change that, we watch her tirelessly work toward equality for all, unfazed when her opinion is unpopular.

Nowhere is this more apparent than after a 2001 request by then-President George W. Bush for Congress to pass the Authorization for Use of Military Force bill, which would grant the President unlimited power to go to war. Because the vote took place just days after September 11 and anger was the prevailing mood of the country, the bill passed unanimously – except for one lone opposition vote. Lee’s.

She stood in front of Congress and warned, “As we act, let us not become the evil that we deplore.” For this, she received death threats and was criticized as being unpatriotic but remained undeterred. “Central to democracy is the right to dissent,” she said.

Over the years, many of her colleagues have regretted their own decision to vote for the bill. Some are interviewed for this documentary, applauding Lee’s courage and admitting they wished they had shared it.

For the next 20 years, Lee would lead the charge to repeal this bill which was used 41 times by three Presidents. The House finally passed the Lee-sponsored measure in 2019.

For a documentary about a politician, Barbara Lee: Speaking Truth to Power has a surprisingly intimate feel to it. Maybe that’s because director Ginzberg is also from the documentary and it’s personal to her. Maybe it’s because Lee herself is so authentic and beloved that her constituents use the phrase, “Barbara Lee Speaks For Me,” as both truth and campaign slogan. Maybe it’s because we get to meet her family, including the sons she raised as a single mother while she was attending college. Or maybe it’s because we’ve finally started to realize that politics is personal and we should be paying attention to who we’re putting in charge of the policies that affect our lives.

During scary times, Mr. Rogers famously advised, “Look for the helpers. You will always find people who are helping.” Ginzberg has put the spotlight on a true helper. Her documentary energizes you to not just look for the helpers but to become one yourself.