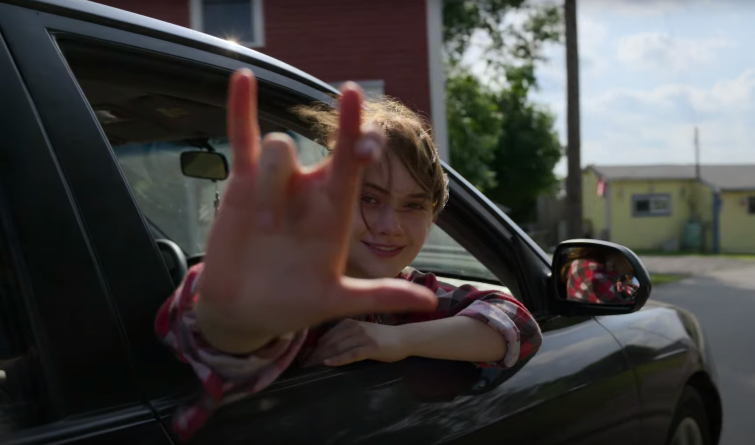 In telling the story of teenage Ruby Rossi (Emilia Jones), the only hearing person in her deaf family, writer/director Sian Heder breathes fresh life into a familiar narrative about a young adult caught between following her dreams and a sense of duty to her home and loved ones. The result is CODA, a warm, funny dramedy with excellent character development and strong performances. It’s easy to see why it was a hit at the 2021 Sundance Film Festival. CODA (an abbreviation for Child of Deaf Adults) is set on the U.S. East Coast, where Ruby and her family — mom Jackie (Marlee Matlin), dad Frank (Troy Kotsur), and older brother Leo (Daniel Durant) — make their living deep-sea fishing. It’s hard work, and it doesn’t pay very well, but the family gets by, and they’re happy. Or so it seems, but Ruby is chafing at the idea of seeing the rest of her life mapped out for her, with no bends in her road and no end in sight to serving as her family’s in-house translator.

Things start to change when Ruby joins the school choir, and her exacting teacher, Mr. Villalobos (Eugenio Derbez), tells her that her love of singing could actually get her into college if she buckles down and works hard. She’s determined to try, but then her family’s business takes a new direction, and they need her help more than ever. And, of course, it’s difficult for them to understand her passion for something for which they have little context.

It’s clear that Heder and her cast took pains to offer authentic portrayals and characterizations. CODA never presents deafness as a disability – or portrays the Rossis as noble souls who must overcome difficult odds. They’re simply a family: They argue, they joke, they tease, they show up for each other. And that’s what makes them so relatable – and memorable. — Betsy Bozdech

Sherin Nicole In the movies historically marginalized communities are mostly featured in stories revolving around trauma—black suffering, queer pain, disabled tragedy and on and on and on… It’s distressing to see lives like yours constantly portrayed as ordeals, rather than in the fullness of the human experience. And then there are films like CODA by writer/director Sian Heder. Centering on Ruby Rossi (Emilia Jones), as the titular hearing child of deaf adults, and featuring Marlee Matlin, Troy Kotsur, and Daniel Durant as her family, CODA isn’t about coming-of-age but instead shows the Rossi family finding their individual voices in distinctly faceted and personal ways. It is a movie about joy and hardship, in which deafness is not a struggle but a way of life. And it’s that last part that deserves the majority of our ‘bravos.’ Stepping out of the margins requires shining a light on the fullness of every community’s humanity. That light shines here.

Susan Wloszczyna: CODA is a coming-of-age story with a twist, given that its title stands for “child of deaf adults.” Set in Gloucester, Mass., this crowd-pleaser offers emotional and humorous bait as we meet 17-year-old Ruby, her non-hearing parents and hunky deaf brother. Alas, our heroine is not so keen on school work, partly because she is required to interpret for her loved ones and be an early-rising participant in the family fishing business. Read full review.

Pam Grady: CODA is a funny and moving coming-of-age tale and examination of family dynamics. As a child of deaf adults (aka CODA) who also has a deaf brother, Ruby has grown up navigating the hearing world for her parents as well as helping out at her dad’s fishing business. But in her last year of high school, a crush on classmate Miles leads her to join the school choir where she gains a lot more than a sweet new boyfriend: She finds herself as the gift of her voice reveals itself. And from there conflict arises. Developing her talent means leaving home after graduation against her family’s wishes. Read full review.

Marilyn Ferdinand CODA, writer/director Sian Heder’s narrative feature about the relationship of Ruby, the titular CODA (Child of Deaf Adults) who is the only hearing person in her family and who, when her family’s fishing business is threatened, must make the tough choice between sticking to her plans to pursue her passion for music and sticking around home to support her parents. The story is solidly engaging, the dilemma is relatable, the characters are quite charismatic and the performances are superb — especially those of Emilla Jones as Ruby and Marlie Matlin as Jackie, her Mom.

Leslie Combemale CODA is about Ruby Rossi, a 17 year old hearing girl who helps her deaf family with their fishing business in Gloucester, Massachusetts. The story would be pretty pedestrian but that it centers entirely on a deaf family, often speaking in ASL, performed by deaf actors, with dialogue shown in subtitles to those who don’t know the language. It is writer/director Sian Heder’s dialogue, and the delivery by the actors, that raises CODA high above standard coming of age fare. This is not a film that makes the story about deafness itself. Read full review.

Jennifer Merin CODA, writer/director Sian Heder’s narrative feature is a family drama about about the relationship between Ruby, the titular CODA (Child of Deaf Adults) who is the only hearing person in her family, and her hearing impaired parents and brother who rely on her to interpret for them in their daily life. When the family’s fishing business is threatened, Ruby must make the tough choice between sticking to her plans to pursue her passion for music and sticking around home to support her parents. The story is solidly engaging, the dilemma is relatable, the characters are quite charismatic and the performances are superb — especially those of Emilla Jones as Ruby and Marlie Matlin as Jackie, her Mom.

Loren King By wrapping her coming of age story in a completely fresh milieu, writer/director Sian Heder delivers that rare thing: an engrossing and moving family centered film. Casting terrific deaf actors, headed by the great Marlee Matlin who deserves this plum role as family matriarch, gives CODA a potent authenticity as does shooting it in the hardscrabble fishing village of Gloucester, Mass. which provides the lived-in setting. Without giving anything away, I will only say: bring tissues. Read full review.

Sandie Angulo Chen: Director Sian Heder’s adaptation of the 2014 French film La Famille Bélier is a well-executed hybrid of a family and coming-of-age drama about a CODA — Child of Deaf Adults — who is the only hearing person in her family. Set in Gloucester, Mass., the film follows high school senior Ruby Rossi (Emilia Jones) who wakes up at 3 a.m. every morning to help her Deaf father (an excellent Troy Kotsur) and older brother (Daniel Durant) on their commercial fishing boat before heading to her classes. Ruby loves to sing, and thanks to encouragement from her energetic music teacher Mr. V (Mexican comedian Eugenio Derbez), she discovers her true potential. The film focuses on the tension Ruby feels between her dreams and her family (who relies on her to navigate the hearing world, from the fishing industry to doctor’s appointments). Marlee Matlin also stars as Ruby’s former beauty queen mother. Heder takes the movie in various directions, yet somehow it all works. Jones and her on-screen family (all three of whom are Deaf) give nuanced, humorous, and touching performances.

Liz Whittemore Writer/director Sian Heder has given the world a gem in CODA. Easily landing in my Top 3 films of 2021, this story manages to be completely unique and wholly relatable all at once. CODA allows us to intimately enter the lives of a working-class family, that just happens to be deaf. It tackles ableism, pride, self worth, and everything in between. I’ll be rooting for this film for years to come. It’s a joyous and breathtaking watch. Read full review.

Cate Marquis CODA is a charming coming-of-age film about the daughter of a family of scrappy, independent fishermen, who all happen to be deaf except her. CODA means “child of deaf adults” but it also has a musical meaning, making it the perfect title for a film about a teen with a passion for singing, something her family neither hears nor comprehends. Ruby’s family is proudly, fiercely independent but, as self-reliant as they are, her parents have come to count on Ruby to be their liaison with the hearing world. So when family’s business is threatened, Ruby must choose between staying home to help them or her dreams of going away to music school. With deaf actors in the roles of her brother and parents, including Marlee Matlin as her feisty mother, and wonderful performances all around, writer/director Sian Heder’s often-funny, warm tale of a family different from the ordinary is a sure crowd-pleaser.