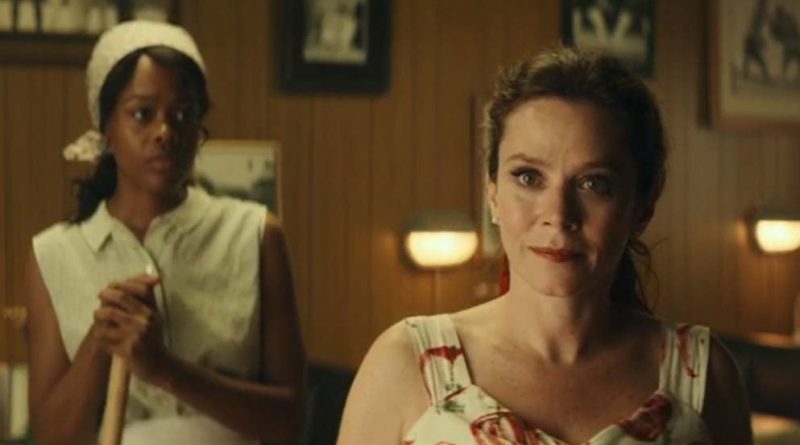 Set in 1963 against the backdrop of the Civil Rights movement, Charming The Hearts Of Men crafts a progressive portrait of a divorcee but fails to strike a balance between the romantic drama at the core and its broader social and political commentary.

Written and directed by S.E. DeRose, Charming The Hearts Of Men centres itself on Grace Gordon (Anna Friel), a 40-ish twice-divorced Southern Belle called home following the death of her father. Accustomed to various “exploits” in the big city and with two weddings under her belt, Grace soon learns that most of her family money has been spent accommodating her lifestyle. For the first time in her life she is, in fact, broke.

Upon discovering her options are limited when it comes to financial independence in the early 1960s, Grace sees the only way out of debt is to find herself a wealthy husband. Together with her long-time hired help (Starletta DuPois and Pauline Dyer), the ladies flip through her late father’s address book looking for a suitable bachelor to help them out of their financial plight. With the help of a Congressman ally (Kelsey Grammer) who is both a worthy suitor and sympathetic ear to her plights, Grace helps inspire historic legislation that will see equal opportunity afforded to women for the first time.

Charming The Hearts Of Men is first and foremost a romantic drama and it is within this theme that it excels. Grace is a sophisticated woman whose friendships and advocacy for equality include both women of colour and those shunned by society. Her quest to find a husband and become financially secure in her own terms are the most charming aspects of the film and where it truly shines. While the only route to financial security presented to her may be marriage, Grace sets out to make her own money for the first time in her life and in doing so, opens doors for other women in a time where working women were an exception.

It would be hard to tell this story and ignore the cultural shift in the American South in the 1960s, but Charming The Hearts Of Men seems unsure of how much emphasis to put on what is happening in society around Grace.

While the Civil Rights movement is used her as a perfunctory primer on how the Civil Rights Act came to include women, we are treated to casual mentions and strained cutaways to Martin Luther King Jr.’s advocate’s attempts to get Black Southerners on board with his politics. We see a counter sit-in that feels forced into the narrative nearly two-thirds of the way through the film, presented to serve as a passive catalyst to Grace’s advocacy for equal rights. Stronger parallels between Grace’s journey to financial independence and the broader political atmosphere could have been better balanced and executed. These more serious moments feel at odds with the film’s more light-hearted scenes and dialogue. Perhaps it’s this reason the film seems to drag, meandering on at a flat pace and never seeming to raise the tension or the stakes at hand.

The cast is well-formed with Friel creating a delightfully well-rounded character on-screen. While she is surrounded by an excellent cast of supporting players, the men are the least interesting part of the story. Sean Astin co-stars as a friendly shopkeeper though he’s given little to do, while Grammer continues to play the same type of character that made him famous on Cheers and Frasier. The real star of the supporting cast is Tina Ivlev as Ruth, a young mother and sex worker in the local brothel whose unlikely friendship with Grace shows she can choose to do more with her life than she had ever envisioned.

Despite tonal inconsistencies, Charming The Hearts Of Men is a pleasant if not unforgettable movie that is ultimately let down by its attempt at drawing parallel themes of race and gender within a broader romantic drama.