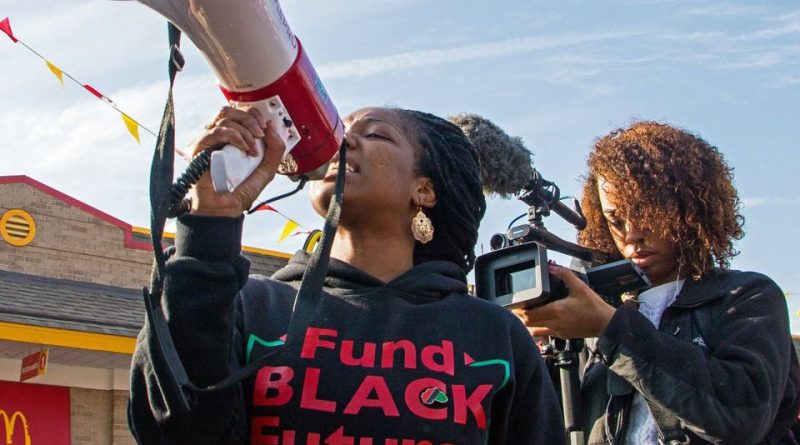 In news reports, social justice movements can look monolithic; yet there are a variety of people who add their voices to a cause. The documentary Unapologetic highlights one segment of Chicago’s Black Lives Matter movement: Black queer feminist abolitionists.

In her feature directorial debut, Ashley O’Shea largely tracks two women, PhD candidate Janaé Bonsu and rap activist Ambrell “Bella Bahhs” Gambrell, millennials who advocate for criminal justice reform through groups such as BYP100. She also interviews others who demand justice for Black women who are victims of police and systemic violence.

“To go to a rally that’s for Black lives and to only see Black men being given any kind of authority on the subject is absurd to me,” says Page May of the group Assata’s Daughters. The sexism and homophobia in these movements “weakens us,” she says.

Even people who are oppressed are capable of being oppressors, adds another activist, Kush Thompson. “If Black queer feminist people are not free, nobody else is going to be free.”

Unapologetic doesn’t delve into such specifics of sexism and homophobia, and it also doesn’t examine every detail of the police shootings that galvanize these groups. Rather, it’s more of a celebration of these women stepping into their confidence and power.

The film’s loose structure touches on several moments from 2012 to 2019, such as protests following the shooting death of Rekia Boyd, 22, in a city park. The film is dedicated to Boyd, but the names of other women nationwide killed by police violence – too many – fill the screen.

Off-duty police officer Dante Servin had confronted several people about making noise in the park, then fired several shots from his car, killing Boyd as she walked away. Servin was charged with involuntary manslaughter, but a judge vacated the charge. An independent department investigation later filed termination charges against him; he resigned in 2016.

The film also touches on the protests following the 2014 death of 17-year-old Laquan McDonald, whom then-Chicago Police Officer Jason Van Dyke shot 16 times. Van Dyke received six years and nine months in prison. Police video of the shooting eventually led to the firing of police Superintendent Garry McCarthy. (Although not in the film, the ensuing U.S. Justice Department investigation also led to a consent decree over the police department.) Chicago’s current mayor, Lori Lightfoot, elected in 2019, appears in archive footage as then-head of the Chicago Police Board.

Unapologetic shows Bonsu, Gambrell, and others giving impassioned speeches before the board and taking to the streets. “This could be anybody I know and love,” Bella says, driving through Chicago’s West Side, where she grew up. “This is my side of town.”

In one scene, the protesters interrupt brunch at a café, chanting, “Say her name” in honor of Boyd and other Black women shot by police. An unidentified white man grouses about how he watches the news and doesn’t understand the point of this.

That seems to be Unapologetic’s larger goal. Bonsu’s PhD is related to finding ways to keep Black women from violence. There’s a system intersectionality – criminal justice, mental health, and so on – that can come into play when a Black woman has contact with police, she says.

Gambrell wins a fellowship that enables her to create the Sister Survivor Network, an organization to help heal women impacted by the prison system. She also raps in the streets, in the studio, and on stage, lifting audiences with her anger and pride. She’s electrifying.

This is often thankless work, and it’s tricky to balance their personal and professional lives with their grass-roots efforts and their politics. Yet they’re determined to stay the course. Black women have too long shouldered other people’s burdens, they note. Here, they encourage one another, stand up to be heard, and listen.