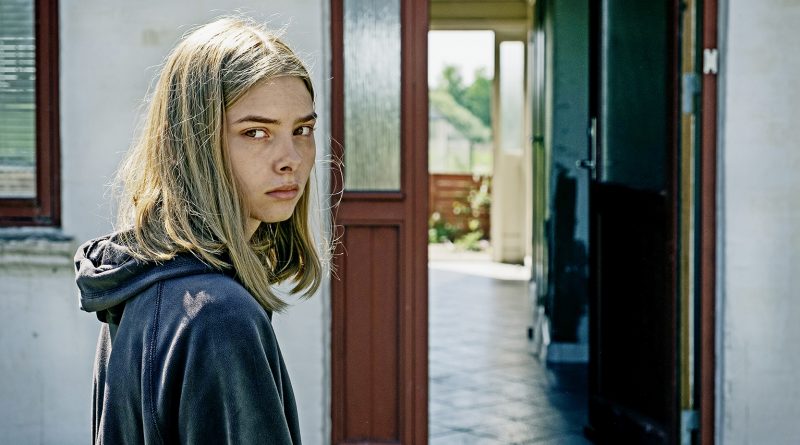 You can’t choose your family.

Sometimes you can’t choose what to do about them, either.

As Wildland’s young protagonist observes, “for some people, things go wrong before they even begin.”

Observing that painful process proves an absorbing and often ominous experience in Danish director Jeanette Nordahl’s feature debut, which premiered at the 2020 Berlin Film Festival — just before the Coronavirus pandemic turned the world upside down.

Shell-shocked 17-year-old Ida (a wary, watchful Sandra Gulberg Kampp) knows all about the world being turned upside down.

Hers certainly has been, after her addict mother totaled their car — and died in the accident.

Now Ida’s being sent to live with her mother’s estranged sister Bodil (compelling Sidse Babett Knudsen, whose credits range from Borgen to Westworld).

There’s the deceptively affable Jonas (Joachim Fjelstrup), Bodil’s eldest; youngest sibling Mads (a brutish Besir Zeciri), who seems to spend most of his time in the basement, smoking pot and playing video games. (Not necessarily in that order.)

In between, there’s David (Winter Brothers’ edgy Elliott Crosset Hove), who’s got a drug problem — and a naive girlfriend (Carla Philip Røder) with no idea what she’s in for.

The same goes for Ida, who’s so traumatized and hungry for connection she seems willing to join her cousins on their rounds as they tend to the family business: loansharking. And worse.

Exactly how — and how long — Ida will survive in this nest of family vipers gives Wildland (the movie’s more pointed Danish title translates to Flesh and Blood) a constant, palpable tone of dread.

Scripted by Ingeborg Topsøe (from a story concocted with director Nordahl), Wildland carries some overtones of the Australian thriller Animal Kingdom — especially in its depiction of matriarch Bodil, who “will do anything” for her family. As long as other family members are willing to do the same, that is.

Throughout, Nordahl — aided by cinematographer David Gallego and production designer Helle Lygum Justesen — effectively contrasts the family’s placid home routine with the criminal behavior that makes it all possible.

Yet there’s a frustrating one-note quality to Wildland that sometimes undercuts its impact — in part because of the movie’s unrelenting focus on the inscrutable Ida, whose passive presence serves as an unsettling stand-in for our own.