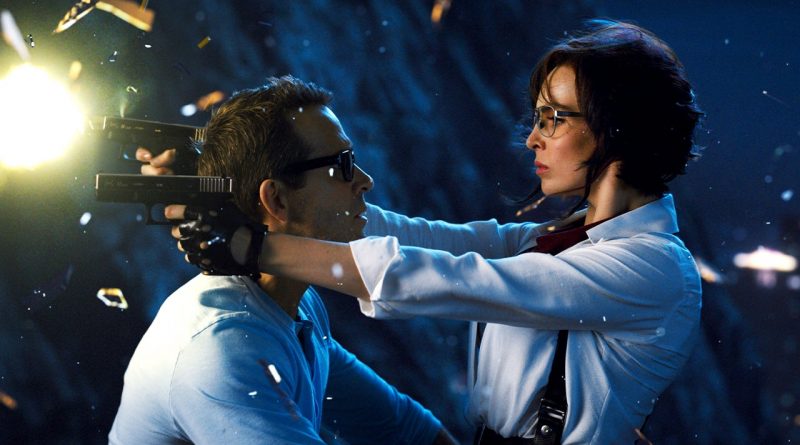 Like the Mariah Carey hit it frequently references, the movie “Free Guy” is a “sweet, sweet fantasy” with a playful sense of humor, zippy action sequences and veritable baskets of Easter eggs.

It’s not hard to level up beyond what previous video game movies have done — especially if you consider just live-action entries and leave out the animated “Wreck-It Ralph” films — and “Free Guy” easily does that and more.

Ryan Reynolds (“Deadpool”) stars as Guy, a cheerful denizen of Free City, where he works as a teller at the local bank alongside his best pal Buddy (a winning Lil Rel Howery, “Get Out”), the branch’s security guard. Both of them love their jobs, despite the alarming number of elaborately dressed thieves who show up on literally a daily basis to rob the place. Guy and Buddy take these vicious workday interruptions in stride, simply dropping to the ground to whisper about their evening plans.

Although he’s mostly content with his simple, routine life, — which includes telling every person he encounters “Don’t have a good day, have a great day” — Guy longs to find love. When he unexpectedly encounters the woman of his dreams (Jodie Comer, “Killing Eve”), his desire to connect with her shakes up his orderly universe enough for Guy to learn that he’s not a real guy at all, but a non-player character, or NPC, in a violent open-world video game called “Free City.”

While the concept of a movie delving into the inner lives of NPCs has plenty of entertaining appeal, director Shawn Levy (“Stranger Things”) and screenwriters Matt Lieberman (“The Christmas Chronicles”) and Zak Penn (“Ready Player One”) thankfully add more levels to “Free Guy.”

Guy’s dream woman isn’t just a highly skilled player who goes by Molotov Girl in “Free City,” which is a sort of cross between the “Grand Theft Auto” series and”Fortnite.” In the real world, she’s Millie, a programmer desperate to prove that the blockbuster game runs off coding she and her best friend Keys (the adorkable Joe Keery, “Stranger Things”) wrote that was pilfered by “Free City’s” flamboyantly obnoxious tech-bro creator Antoine (Taika Waititi, “Jojo Rabbit”).

Since Keys and his pal Mouser (Utkarsh Ambudkar, “Brittany Runs a Marathon”) work for Antoine’s company, Soonami, they know they better find any evidence of ill-gotten codes quickly. The greedy tech mogul plans to overwrite “Free City” to force all the players to start over when the sequel debuts, which will destroy not only any proof of theft but also delete Guy and his whole world.

Reynolds cuts his familiar brand of snarky wit with an agreeable optimism, unsuspected depth and a more family-friendly (although still firmly PG-13) tone. When he assumes the role of protector over the “Free City” NPCs, he plays the good guy with such sincerity that you buy into the viral craze caused by “Blue Shirt Guy.”

While Waititi gleefully chews scenery as the movie’s over-the-top villain, Comer is a charismatic leading lady. Her Molotov Girl is an action hero perfectly capable of saving herself, and her Millie is a brilliant, beautiful coder and gamer.

With its “Truman Show”-style existentialism and upbeat storytelling, “Free Guy” is fun for all but the youngest children and grumpiest of moviegoers. But its plethora of Easter eggs will make the summer popcorn flick — opening Aug. 13 only in theaters — particularly appealing to teenagers, gamers and pop culture aficionados.