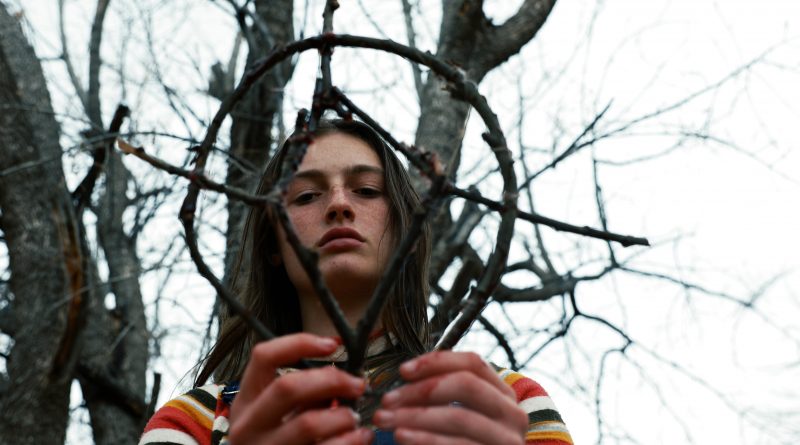 It’s hard to think of a collaborative filmmaking collective more exciting and genuinely cutting edge than The Adams Family right now. For those yet to discover their previous work (particularly their break-out 2019 feature The Deeper You Dig), their name is more than a mysterious and spooky reference – these films are made by an actual family, John Adams, Toby Poser and Zelda Adams. Written, directed, and starring these three, another daughter – Lulu – appears in the film also. But it doesn’t stop there; Zelda and John shot the movie, its extraordinary music is performed by Zelda, Toby and John’s band with John acting as sound designer, Toby also tackles solo producer duties and wrangles costuming, John edits, and Zelda even helmed drone operator duties. It’s a hackneyed turn of phrase but here, one well-earned; Hellbender – like all the Adams Family productions – is very much a family affair.

But make no mistake, Hellbender is more than a novelty family act. Although they have been making features and shorts for many years, The Deeper You Dig stunned audiences with its world premiere at Montreal’s Fantasia International Film Fest, and became something of a genre festival darling. While The Deeper You Dig was strong and exciting, it feels like an entirely new palette of descriptors is required to even just begin to describe just what an enormous leap ahead in quality and originality Hellbender is. Perhaps rather than relying on adjectives, there’s another way to communicate the scale of just how mammoth what is happening here is; watching the film, I felt genuinely embarrassed for Netflix, Amazon and the like for not cottoning onto the goldmine that this family is as a micro-production house for straight-up incredible genre film. The streaming service Shudder are, unsurprisingly, a little savvier, having snapped up screening rights for Hellbender even before its Fantasia world premiere. The raw, fresh energy of Hellbender is evidence alone that this is, despite them being so well established already, just the beginning for the Adams Family.

In this film, as we discover in the opening moments alone, the sky is quite literally the limit. It’s an undefined ye olde time of witch hunts, we glean, as a group of women hang another by a tree until she dies. Or, at least, appears to. When she twitches herself back to life, one woman does not hesitate and kills her again, but in mere moments the supposed victim takes flight, launching like a rocket into the sky as she ignites, literally catching on fire. Leaping forward to the present day, we meet that woman’s descendants, Izzy (Zelda Adams) and her mother (Toby Poser) who live an isolated but relatively happy life in the lush mountains, their reclusiveness supposedly because Izzy has a rare autoimmune disease. As she soon learns, however, this is not the case; her mother has kept her squirrelled away from the world because Izzy and she both are “Hellbenders”, defined as a hybrid of witches, demons and predatory animals. While her mother tells herself she has her powers under control, when Izzy learns that she too has these abilities, a mother-daughter power struggle collides with a supernatural coming of age story that at its heart is also a powerful tale of the maternal bond and that old chestnut, the circle of life.

With breathtaking cinematography, a dreamy soundtrack (much performed on screen by Izzy and her mother themselves), a perfectly sculpted screenplay and dazzling interpersonal dynamics that just won’t quit, Hellbender is a masterclass in low-budget indie filmmaking – not just in terms of genre, but across the board. After The Deeper You Dig it was a mild curiosity just where the Adams Family could go from there, but even the most ardent admirers of that film (myself included) could not have even remotely begun to brace themselves for the perfection of Hellbender. A film embossed with all the ferocity and heart and passion and craft of the most powerful of art, Hellbender is a reminder that when film like this is revealed as possible, we never should settle for less.