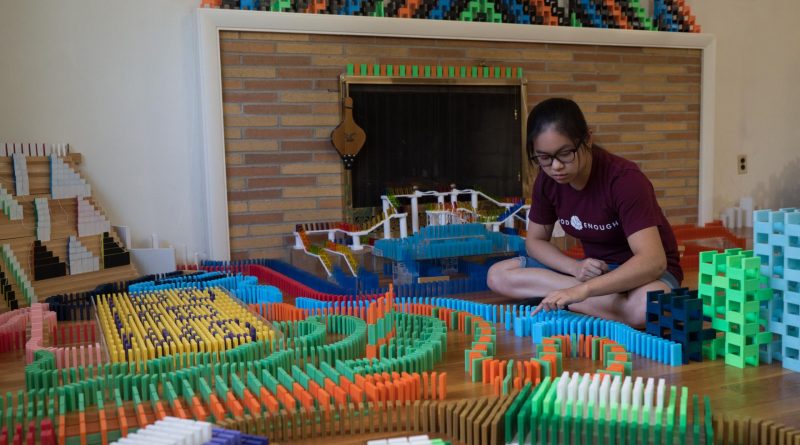 Many of us probably haven’t thought about dominoes, those tiles as ordinary as a deck of cards, let alone played with them in years. But chances are you’ve never seen dominoes used in the way that Lily Hevesh uses them to construct elaborate spirals and sculptures only to be toppled with the gentle flick of a finger into a mesmerizing, nearly musical chain reaction. Hevesh is the 20 year old superstar of professional domino construction — yes, there is such a thing — a feat that requires ingenuity and engineering, not to mention patience and concentration. Thanks to YouTube, she’s become a phenomenon with some three million subscribers.

Jeremy Workman’s crowd pleaser of a film focuses mostly on the likable, modest Hevesh who’s been developing this odd skill since childhood and is now the preeminent domino artist in the world. The documentary is also about the YouTube age when the young and enterprising can quickly gain celebrity and even forge careers fromYouTube popularity. Lily Topples the World doesn’t delve deeply into this murky arena where worth is measured by numbers of subscribers. Hevesh certainly seems grounded and hard working enough to navigate it even as she decides early in the film to leave college to concentrate solely on her domino-related business opportunities and aspirations.

The film charts her mastery and her collaborations with other domino artists, nearly all of them young men from around the world, including major installations for The Tonight Show and numerous corporate and educational events where she encourages and advises her legions of young follows, including many girls. With disarming soft spoken assuredness, Lily expertly shoots her own videos and instructs professional videographers on how to capture the toppling tiles. Later on she meets with a team of executives and designers as she prepares to launch her own brand of toppling dominoes.

Also revealing is the film’s attention to Hevesh’s parents who adopted Lily from China was she was just a year old. She’d been abandoned at the doorstep of an orphanage without any identification. Her parents who often accompany Lily to events describe how even from that tender age, Lily feared being abandoned again and clung to them. Lily herself describes feeling isolated as the sole Asian in the small New Hampshire town where she was raised with two older siblings. She took refuge in the solitary pursuit of creating her elaborate domino designs then started her YouTube channel when she was just nine or 10, under the avatar Hevesh5 since she’s the fifth member of the Hevesh family. It’s a modern story for the internet age but Hevesh seems to possess the qualities and work ethic that would have made her stand out in any era and under any circumstances.