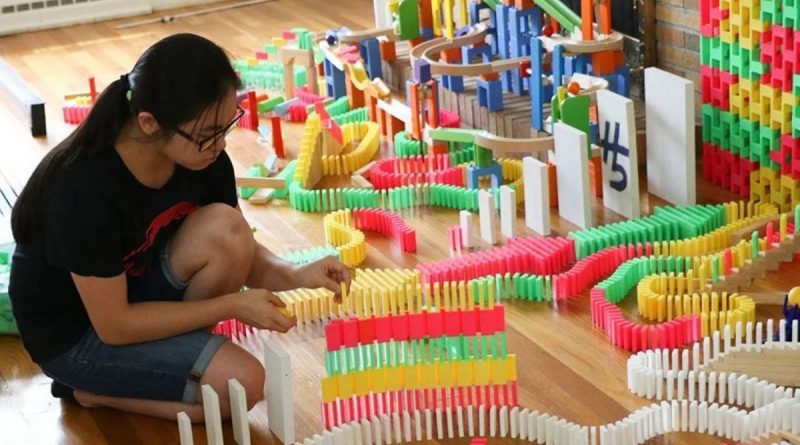 A few years ago, the late film critic Roger Ebert got into a dust-up with the gaming community over whether games could be considered art. Ebert, older and more traditional, could not accept that games could be art, but eventually, he changed his tune. As new generations come up, they bring with them new ideas and techniques that challenge our notions not only of what art is, but also what makes a community.

Jeremy Workman’s charming and inspiring documentary, Lily Topples the World, focuses on Lily Hevesh, a 20-year-old woman who is a celebrity in a community few older people know anything about—the YouTube world of domino art. Known by her millions of YouTube fans as Hevesh5, Lily is pursuing a career that involves setting up colored tiles in intricate patterns and structures and knocking them down in precise, mesmerizing order. Is it art? Absolutely, in the same manner as sand paintings are—ephemeral, but the product of infinite care and devotion.

Lily was born in China and abandoned shortly after birth because of her gender. She was adopted by a big-hearted white family in Sandown, New Hampshire, at the age of one. Shy, fearful of abandonment, aware of her difference in her American town, Lily found a way to connect with others through dominoes. We follow her as she takes on corporate jobs with fellow domino builders, attends YouTube conventions to meet her thrilled fans, and tries to start her own line of dominoes.

Director Workman has a real talent for finding people who dance to their own tunes. His 2013 film Magical Universe documents outsider artist Al Carbee, best known for his photographs of Barbie dolls. In The World Beneath Your Feet (2018), he follows Matt Green, who eschews work to walk every inch of New York City—8,000 miles in all. Lily tried the college route, but dropped out to pursue her art.

Workman’s curiosity and respect for his subjects allows the rest of us a chance to meet some really fascinating people doing under-the-radar things and understand what it might be like to sidestep the treadmill society has set in front of us. I’m grateful to him for introducing me to Lily, a generous, young woman who makes me feel more hopeful about the future.