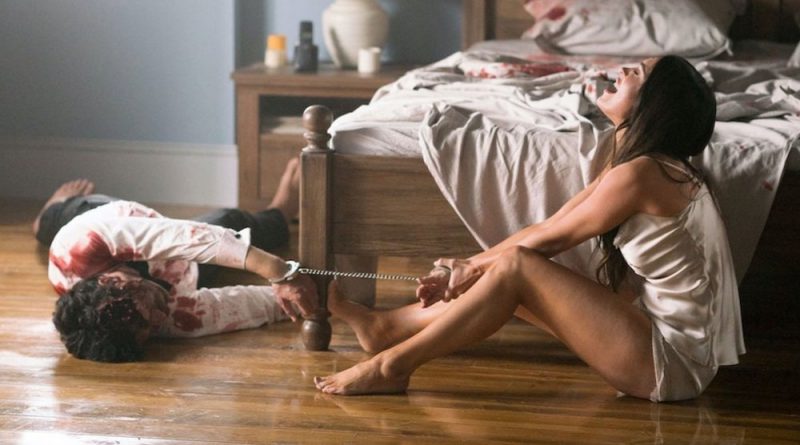 As this wannabe thriller begins, duplicitous Emma (Megan Fox) is breaking off an extramarital affair with an employee (Aml Ameen) at her wealthy husband’s law firm.

She’s married to Mark (Eoin Macken), a suspicious creep who – after giving her a chic ‘steel’ necklace to celebrate their 11th anniversary – blindfolds Emma, who is understandably nervous, and drives her to their remote, snow-bound vacation home on a lake for a romantic interlude.

When she awakens the next morning, Emma discovers she’s handcuffed to Mark, who promptly shoots himself in the head, splattering blood all over Emma and their bedroom.

Unable to extricate herself from the shackles that firmly bind her to Mark’s corpse, she drags him around the room, then down the stairs and around and about, trying to escape what amounts to a calculated death trap, since scheming, sadistic Mark has made sure that Emma’s cellphone is disabled and their car won’t start.

That’s when two thieves (Callan Mulvey, Jack Roth), including one who assaulted her years earlier, arrive on the scene, determined to break into a secure safe that requires not only a numerical combination but fingerprint authorization.

It should be noted that – throughout her ordeal – while struggling to survive – Emma’s hair and makeup remain ‘perfect,’ as if gorgeous, glamorous Megan Fox (Transformers) couldn’t bear to face the reality of Emma’s dilemma.

Scripted by Jason Carvey to run a taut 88 minutes, it marks the feature directorial debut of S.K. Dale (Scott Dale), who filmed in frigid Bulgaria.

But the plot contrivances are beyond absurd – with the home invasion eventually veering into Stephen King-type horror.

On the Granger Gauge of 1 to 10, Till Death is a tensely twisted, yet tawdry 3, available at Redbox kiosks and streaming on Apple TV, Fandango and other platforms.