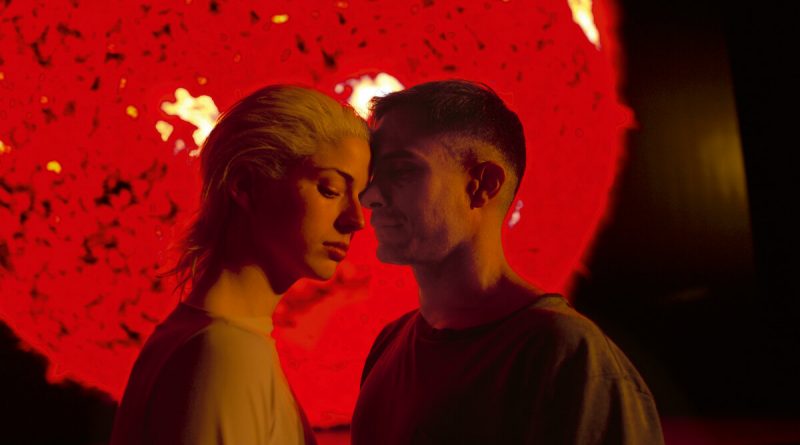 Chilean filmmaker Pablo Larrain’s psychological drama Ema revolves around a dancer whose icy, Hitchcock-blonde looks lie lightly over a selfish, troubled interior. Ema (Mariana Di Girolamo), who also teaches expressive movement classes to schoolchildren, and her husband, choreographer Gaston (Gael Garcia Bernal), twelve years her senior, adopted a six-year-old boy Polo and then returned him to the orphanage after the child set a series of fires, the last of which left Ema’s sister scarred for life. Their marriage has survived, but not without significant damage. Ema blames Gaston for the fact that they had to adopt an older child–“one with a moustache,” she hisses melodramatically–while he accuses her of turning the boy into a pyromaniac. Their marriage has survived but, unsurprisingly, not without significant damage. She’s also not popular with her fellow teachers, who are understandably concerned about the Polo situation, since he attended their school and they’re stuck trying to figure out a way to explain his disappearance to his former classmates without making them worry that their own parents might decide to give them away if they’re naughty; one suggests Ema take a leave to make the whole thing less hard on them.

The final blow lands when their caseworker makes it clear that they’re not going to be able to adopt another child; they failed spectacularly the first time, the 12-year difference in their ages is an issue, she’s pretty sure Gaston is gay and oh yes–they returned their first one like a defective household appliance. Unemployed and faced with the likelihood that she’ll never be a mother, Ema drowns her sorrows in one-night stands, the thrust and grind of reggaeton dancing and serial arson–Gaston wasn’t wrong about the pyromania.

The best thing about Ema is that it’s breathtakingly beautiful, its vivid hues recalling the eye-popping art direction and cinematography of Pedro Almodovar’s candy-colored Barcelona. In fact, were Ema a comedy, Ema could be an early Almodovar heroine, an impulsive force of chaos ricocheting through other people’s lives like butterfly leaving delightful chaos in her wake. But it isn’t, and that’s the worst thing about the film. Ema is a pampered, self-centered force of destruction who treats other people like toys to be ignored or discarded when she doesn’t feel like playing with them–even Hitchcock’s light-fingered Marnie is easier to sympathize with; she channels her darkness into theft, not wholescale destruction. The best is that Mariana Di Girolamo is a fine actress; playing a fundamentally unlikable character–a human wrecking ball, selfish, heedless and indifferent to the havoc she wreaks on other peoples’ lives–and to make her someone with whom viewers can empathize is a true testament to the power of craft and commitment.