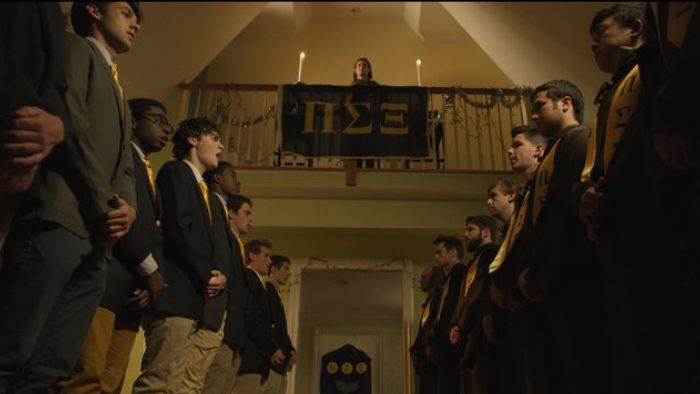 Barbara O’Brien, an Irish Catholic mom in the new drama Rushed, is a force of nature. She says the rosary every morning between yelling for her kids to get ready for school and cussing about how they’ll be late.

Hogan infuses Barbara with such lived-in certainty that her performance is the strongest reason to watch Rushed. Unfortunately, she and co-star Robert Patrick (Goliath, Terminator 2: Judgment Day), as Barbara’s husband, Jim, are mired in a story that feels too familiar, if not dated.

The O’Briens are a working-class family in Upstate New York, Their son attends college several miles from home. Jimmy, and his roommate, Vergil (Justin Linville, Here Today), are pledging to join a fraternity, which involves crawling across broken glass and someone urinating on them. The fraternity brothers also bind their hands and lead them blindfolded out to the woods, where they recite a loyalty oath while guzzling alcohol.

Barbara and Jim, who was a fraternity guy in his youth, know about the pledging but are unaware of the hazing and the abuse. The plot kicks into gear when Steven (Jake Weary, Animal Kingdom), the fraternity president who oozes privileged arrogance, decides he just doesn’t like Jimmy and spikes his beer with drugs at a frat party. As Jimmy reels, Stephen plies him with shots, then straps him to a chair with duct tape and pours more booze down his throat, ignoring Vergil’s pleas to stop and call an ambulance.

After Jimmy’s death in the first act, the college administration’s determination that no one is liable, sends Barbara into a depression. She’s not the type of person to sit still for long, though, and she soon learns through online news reports about other hazing-related deaths. She sets out to contact these youths’ mothers, then meet with a senator (Jordan Lage, Madam Secretary) who was a member of her husband’s fraternity. Barbara hopes he’ll draft legislation that provides for more oversight during the pledging process.

Barbara tapes her interviews with the other moms, including Mary Donohue (Peri Gilpin, Frasier), the wealthy wife of Tom Donohue (Sean Cullen, Mindhunter), another fraternity guy back in the day who thinks that hazing is tradition. Director Vibeke Muasya (Lost in Africa, A Dog’s Life) and Hogan, who wrote the script and co-produced the film with Patrick, ground the film in Barbara’s instant rapport with these women, as well as Barbara’s grief and colorful personality. (She describes the Donohues’ house as “splashy, splashy.”) This provides an anchor when the story veers into gun-toting-revenge-mom territory.

Before then, viewers might find the O’Briens painfully naive. Fraternities haze. They have for decades. Hazing deaths even have made national news in recent years, such as when Robert Champion of Florida A&M University died in 2011 after being punched, kicked, and beaten. Fifteen people faced criminal charges and were either convicted or accepted plea deals, according to news reports. The university also paid a $1.1 million settlement to Champion’s family.

Yet in Rushed, the O’Briens are oblivious. When Barbara frets early in the film about Jimmy missing classes, her husband assures her that the fraternity will keep him in line: “They turn boys into men.” Meanwhile, she urges Jimmy on the phone to practice reciting the fraternity’s oath, as if he’s prepping for an exam.

Greek life on campuses is still ripe for compelling stories. New York Magazine’s The Cut published an article just this month exploring the racism and classism in this system, using the University of Alabama’s sororities as an example. Rushed makes the grief of its parents tangible, but the overall setup feels as if we’ve been here before.