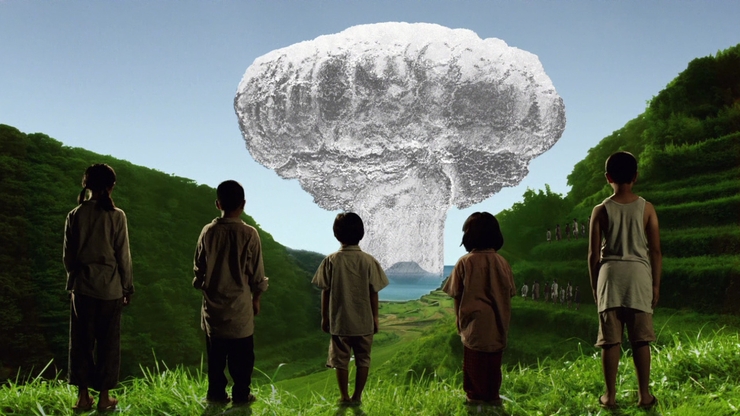 Casting Blossoms to the Sky connects wars with natural disasters.

In Casting Blossoms to the Sky Japanese writer/director Nobuhiko Ôbayashi mounts a plea for peace, kindness, and compassion through a blizzard of images. Dedicated “To the children of the future from adults who lived the past,” the film layers memories of wartime tragedies and natural disasters, primarily WWII cluster bombs dropped on Nagaoka and the 2011 Great East Japan Earthquake.

Along the way, Fukushima, the Bikini Atoll, and Pearl Harbor receive homages. At two hours forty minutes running time, the presentation struggles between accumulating important details and a feverish excess of images, including animation, reimagined and reenacted events, surreal images, rehearsals for and presentation of the play There’s Still Time Until a War, and direct address to the camera by young and old.

Sharing painful history, a linchpin to the horror, Liliko Motoki speaks of her one-and-a-half year old baby Hana who died on her mother’s back in the incendiary bombs of the 1945 Nagaoka air raid that claimed approximately fifteen hundred citizens. Meantime, wheeling effortlessly around on a unicycle, a teenage Hana guides us through the past and present along with investigative reporter Endo Reiko whose ex-boyfriend produces the play.

In memory of the deceased, this profound plea leads to the commemorative Phoenix fireworks display, with a repeated message, “If people made pretty fireworks instead of bombs, there wouldn’t be any wars.” And in an unprecedented pairing, the elaborate Nagaoka fireworks display is echoed by one at Pearl Harbor. Interspersed throughout events, individuals observe the beautiful Japanese countryside of today while harrowing experiences intervene, appropriately depiction past brutality. Pleasant background music accompanies too many of all these scenes, an unnecessary, unwelcome addition. It this all sounds like too much, it is, though it is also, ultimately, a quite moving, haunting tribute. In Japanese with English subtitles.