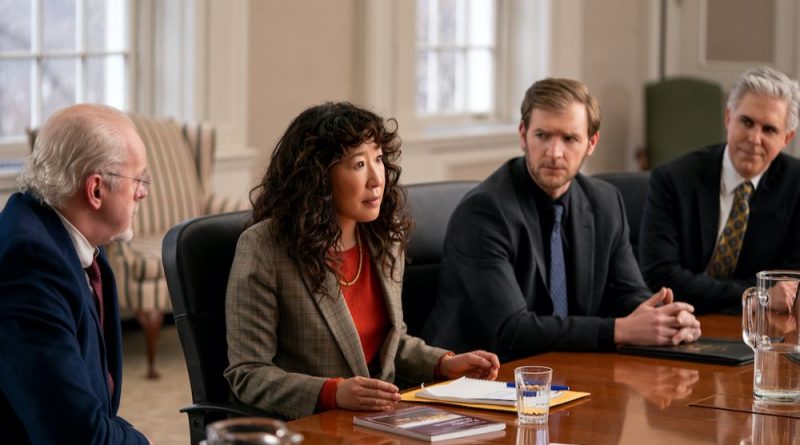 In The Chair, Amanda Peet and Annie Wyman created not only a rom-com but also a horror show. While a cord of romance threads through the story and humor tickles its plot, the horror closes in on reality. “The Chair” in the title is an Asian-American elevated to chair a college English Department.

What Dr. Ji-Yoon Kim inherits, however, is a losing game, and she’s right to think that she was put in that place to blame when the department crashes and burns. However, Dr. Kim does her best. That’s what she’s always done for her father and her adopted daughter, Ju-Ju, a Mexican-American charged with teaching her classmates about the Day of the Dead.

Dr. Kim also does her best to care for her department of English professors. They line up around the board room like the vestry council in The Vicar of Dibley, which is also about a woman assuming a man’s role. The faculty includes a vivacious young black woman seeking tenure, a vivacious old white woman dumped into a basement office in hopes that she’ll retire from there. The recently widowed, attractive novelist causes Dr. Kim more problems; when he waves his arm in a Hitler salute, that video goes viral. That’s the scary part.

Peet’s and Wyman’s exemplary writing captures both the layered tension in a university but also the love for teaching. “To be an English teacher you have to fall in love with stories,” declares Dr. Kim — and oh! that last scene of her presenting Emily Dickinson. Stephanie Economou’s music jazzes up scenes and interludes, and Jim Frohna’s cinematography caresses academic architecture.

The cast shines. Nana Mensah plays the to-be-tenured prof. Amazing little Everly Carganilla plays Ju-Ju, and Bob Balaban is one old gar. As the Chaucer prof., the exquisite Holland Taylor bathes “every veyne in switch licour.” David Morse is the despicably dutiful dean, and Jay Duplass scores major cute points as the beloved writer. The star, though, is Sandra Oh, who chairs this series episode to episode as Dr. Kim. Oh ranges from articulating to babbling, delivering an A+ monologue at the start of Episode 6.
The Chair brings tears of joy and fear as it recognizes the ardor of literature in modern campus life amid the odor of cancelation.