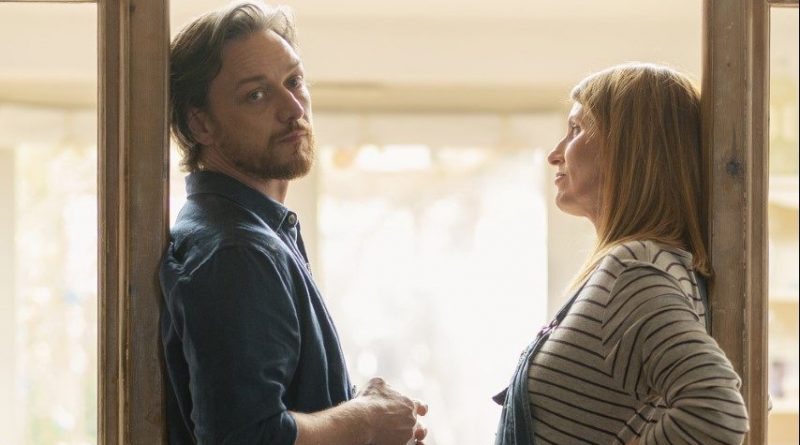 A film about Covid-19…is it too soon? The answer, thanks to the brilliance in writing, directing and acting in the new movie Together, is a resounding no! In fact, the dynamics and messages within make it the perfect time to see a movie about this on-going pandemic with no end in sight.

Dennis Kelly writes the screenplay depicting a couple (James McAvoy and Sharon Horgan) whose relationship is impacted by Covid.

He (McAvoy) and She (Horgan) invite us into their home as they find themselves in the beginning of the lockdown back in March of 2020 in the UK. They break the “fourth wall” to include us in the conversation, sharing their most intimate feelings not just about the world around them, but about themselves and their toxic relationship.

He and She have a young son, Artie or Arthur (the name itself is a bone of contention between the couple). Arthur is all but silent, however he is a pivotal part of the story. And as quickly as Covid-19 descended upon its human hosts, the story takes off, plunging us back to that time that most of us would describe as a complete blur. Together finds all the pertinent moments and highlights of the last 18 months, reminding us of the significance of each of them.

As the viewer, we check in with the couple every so often with chapter markers counting the number of lives lost in the UK. This feels like the undercurrent of the smaller stories that He and She are telling us. He and She look back on the last month or so, sharing with us like a video journal what has happened in their relationship, how much they despise one another and the on-going confusion of lockdown. Like the pandemic impacting the economy and lives of the world, their world has changed on an emotional, mental, and financial level as well. The parallel lines of the global event and the individual stories are clearly drawn using razor sharp humor, irony, and the poignant reality of it all.

He and She are polar opposites and in this case, at least initially, opposites do not attract. Being stuck together, the two must find a way to function on lockdown, trust in decisions of their government officials, and hope for the best. Like so many others experienced, disappointment and anger are the result of their hoping. But within this volatility, both characters have the fortitude to look at the world and themselves a little differently. Political viewpoints, economic inequities, science, and math — She delivers a tragically moving definition of the word “exponential”— along with love and its antonym are all splayed on the cutting board, raw and open for examination. The delivery of every scene, the interaction of our two characters, is brutal, frequently humorous, but the undercurrent of reality continually washes over us.

From the seemingly trivial issue of eggplant for dinner which snowballs into a discussion of entry-level grocery workers to “carers” for her mom in a nursing home which also develops into wages for these workers as well as the government decisions resulting in countless unnecessary deaths, Together hits all the dissonant notes of the pandemic. Having a school-aged son who seems a bit different also plays an important role in not only their relationship, but the educational delivery of that time period just adds to the disharmonic chord being struck repeatedly.

Horgan and McAvoy are the universal everyday couple. Their rocky relationship is brought to the forefront by the pandemic, but it is these actors’ skilled portrayals that brings us into their lives making us feel like we are a part of their world. Horgan and McAvoy’s chemistry, sometimes explosive, but always genuine, find and deliver authenticity that never feels rehearsed or staged. It’s sheer brilliance.

Together, a predominantly two-person show, is a brutal wake-up call to factually and accurately recall the complicated layers of what this past year-and-a-half was like, but it does so with riveting edgy humor that slices through you to make you chuckle, acknowledging its reality. Will there be a sequel called Together Again?