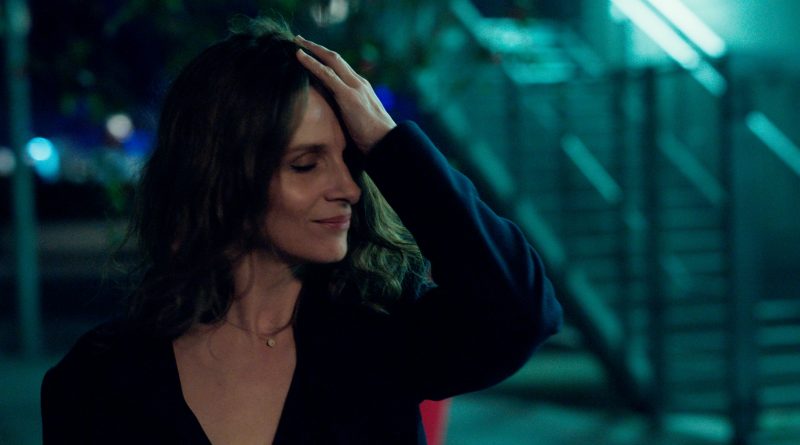 The power of love, the need for validation, and the nature of identity are compellingly tangled in Who You Think I Am, director Safy Nebbou’s adaptation of French writer Camille Laurens’ novel. Juliette Binoche stars as Claire Millaud, an accomplished academic who’s drifting and lonely in the wake of a midlife divorce. Her impulsive decision one night to pose as a much younger woman online leads to both joy and heartbreak. The film is structured largely as a series of flashbacks as Claire tells her tale to her new therapist, Dr. Catherine Bormans (Nicole Garcia). We meet Claire’s much younger lover, Ludo (Guillaume Gouix), who offers her physical passion but not the emotional involvement she craves. Feeling insecure about their status, she creates a fake Facebook profile for beautiful twentysomething Clara Antunes and reaches out to Ludo’s roommate, Alex (François Civil), in an attempt to find out more about Ludo’s friends and activities. But “Clara” quickly finds herself falling for Alex instead, spending long hours chatting, first online and then on the phone. Claire knows that her deception means they can’t be together, but how can she give him up? And if she does, what happens next?

As the movie progresses, we learn that Claire may not be the most reliable narrator, which makes the twists and turns her story takes all the more intriguing. Is she selfish or selfless? Poised and confident or a wreck? Why is she telling all of this to Dr. Bormans in the first place? Answers are revealed, but they’re also a matter of perspective. Claire’s two sons with her ex-husband can’t understand why Maman is acting so peculiarly; to Claire, all else pales in comparison to the connection she has with Alex. For the first time in a long time, she feels loved, desired, and cherished.

Binoche is excellent as Claire, making it believable that even a woman who looks like Juliette Binoche can be undermined by feelings of low self worth when life has come at her hard. Even the scenes she spends typing and building a Facebook profile are compelling, and that’s saying something. Speaking of the tech giant, while Nebbou doesn’t outright condemn social media in Who You Think I Am, he certainly shows its potential for harm. Whether you view the film as a rich character study of a complex woman in midlife or as a catfishing cautionary tale, its bound to keep your attention. — Betsy Bozdech

Loren King Director Safy Nebbou’s alternately sharp and sensitive tale of romantic love and obsession in the internet age is layered with many twists and surprises. It’s held together by not only Binoche’s luminous, passionate, naturalistic performance as a fifty-something woman who feels invisible (and in one brilliant scene actually is) but also Nicole Garcia as Dr. Catherine Bormans, the psychiatrist who is her sounding board, provocateur and, maybe, savior. Read full review.

Nell Minow: The reason for the persistence of catfishing online personas is not because we want others to see us as what we are not. It is because not being seen or heard allows us to show an essence of identity that feels truer than the way we look or how many birthdays we have had. Juliette Binoche is one of the treasures of international cinema and her luminous performance is what makes this twisty story as much about our own sense of who we are as much as about the version of herself her character wants to create.

Leslie Combemale Who You Think I Am presents Juliette Binoche at her most fearless and vulnerable, playing a woman who loses herself, and in her attempt to win herself back makes a series of really bad choices that promise to have long term repercussions. Through it all, she’s so compelling, the audience can’t look away. Director and co-writer Safy Nebbou, who wrote the screenplay based on a novel by Camille Laurens, had himself an experience with cat fishing, an experience he drew upon in writing and directing the film. To his credit, he said it was important to co-write with a female writer, and the gender balance is reflected in the film’s subtleties and nuances. The message about self acceptance, regardless of outside perceptions, is a powerful one driven home by Binoche’s performance.

Susan Wloszczyna: Director Safy Nebbou’s best move was to hire the still-fabulous Juliette Binoche to play a desperately lonely French lit professor in Who You Think I Am. They may try to hide her beauty behind reading glasses and messy hair, but the actress is still as glowing as she was in 1996’s The English Patient and her commitment to this sometimes strained social-media conceit is quite riveting to observe. Read full review.

Jennifer Merin Who You Think I Am is a thoroughly compelling narrative about a mid-life women who, suffering extreme loneliness, seeks companionship online and soon finds herself deeply engaged in an online romance with a younger man who wants desperately to meet her in person. She’s hot to meet him, too. Problem is that she’s created an online profile of herself — with images and other details — as a much younger woman. Big desire. Big dilemma. Big guilt. It all works out in the end, after a string of deeply engaging plot twists and a lot of inherent drama. Trust that the wonderful Juliette Binoche carries the film with a beautifully nuanced and relatable performance. Yes, it’s in French with English subs. Et voila!

Sandie Angulo Chen: Academy Award winner Juliette Binoche adds another memorable performance to her filmography in this French drama. Writer-director Safy Nebbou’s adaptation of the psychological thriller by Camille Laurens explores ageism, social media, and desire. Binoche plays Claire Millaud, a middle-aged professor of literature who pretends to be Clara, a 24-year-old, in a fake Facebook profile in order to keep tabs on her younger ex-lover Ludo and ends up in all-consuming text and phone relationship with his friend Alex. Told in flashbacks as Claire confesses to her therapist, the story highlights what an incredible actor Binoche is, humanizing a woman who crosses moral, ethical and legal lines as she delves deeper and deeper into her lies.

Liz Whittemore An unexpected catfish story, Who You Think I Am takes us on an emotional journey of love and self-acceptance from the viewpoint of a successful, middle-aged professor, played elegantly by Juliette Binoche. Slow truth-telling through therapy sessions reveals Claire’s innermost fears and desires. It’s honest conversation between two women and it eases the audience into the film’s plot. The intimacy there is freeing and filled with complexity. The precarious highwire act Binoche walks between reality and lies is thrilling to watch. Juxtaposing Claire’s literature lectures with her actions is simply brilliant. It is a powerful device, perhaps masquerading as subtle to a casual viewer. Who You Think I Am is sort of breathtaking from the very beginning. It’s like watching a romance novel play out before your eyes. It’s a film about throwing inhibition to the wind regardless of the result. Do not for a moment get comfortable with the direction of this story, I beg of you. Who You Think I Am will continue to shock you. It is steeped in psychological nuance. Brimming with tense anticipation, this one will make your heart race.

Cate Marquis A chilling French drama with Juliette Binoche as a middle-aged woman who befriends a younger man on Facebook, but posing as a 24-year-old beauty. The young man is the assistant of her ex-lover, another younger man who just dumped her, and at first, she is using the connection to keep track of her ex. But the relationship quickly changes into something else, and she finds herself facing a dilemma when he wants to meet her in person. The tale unfolds as she tells it to a psychologist, and is filled with unexpected twists, and commentary on toxic obsession with youth.

Title: Who You Think I Am