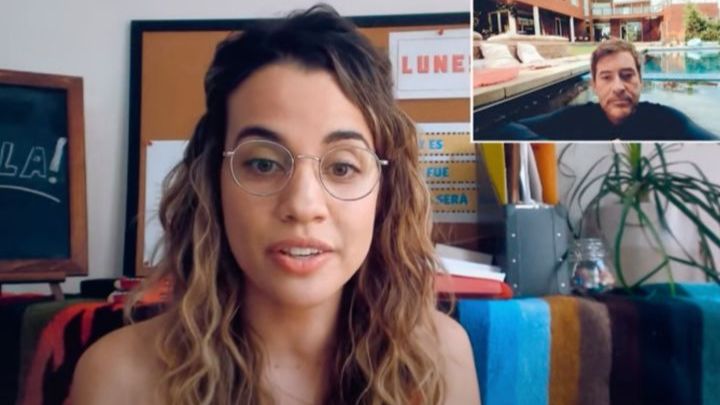 At a time when so much of our country is filled with divisive politics and ugly, stupid and false rhetoric while selfish anti-vaxers and anti-maskers refuse to do the right thing, here comes along a charming balm of a two-hander in the form of director Natalie Morales’s Language Lessons, which she wrote with her co-star, Mark Duplass. It provides a perfect oasis of sorts from all the pain and agony of the news headlines of late. It also might be the best Zoom meeting you will ever experience as well.

It also subtlety captures the disquieting mood of the COVID pandemic, without actually referring to it. The set-up? Duplass plays Adam, a middle-ager married to Will while basking in privilege and wealth in his Oakland dream home, complete with a pool that features both cold and warm water spaces. Will, who oversees a dance company, decides to buy 100 weekly Spanish lessons for a thousand dollars for his partner’s birthday. That is where Morales comes in as Adam’s teacher Carino.

It turns out that he is somewhat fluent in the language already, having studied Spanish in school, although if he stumbles at times. She was born in Cuba and lived in Miami for a time. At the moment, Carino is ensconced in Costa Rica and her sessions with Adam are done online. At first, teacher and student test each other out. Meanwhile, Adam endears himself to her as he confuses the Spanish word for embarrassed with “embarazado,” which means he is pregnant, causing Carino to burst out laughing. The pair quickly form an easy and genuine rapport with each other. At one point, they trade references from Dirty Dancing in Spanish as she explains her nickname means “affection,” adding “just like Baby was Baby in the movie.” He jokingly adds in Spanish that “You carried a watermelon.”

But when Adam’s suddenly suffers a terrible loss, Carino becomes more of a shrink and a confident than just a teacher, even checking out Adam’s social media accounts. She shares the fact that both her mother and grandmother are no longer alive and that she is divorced from her husband. But during a one late-night Zoom session, she shows up drunk, with bruises on her face and eventually shares some scary news with her student.

The ending is a little too on the nose for its own good and, oddly, the teaching eventually takes a backseat to what is going on in both of their lives. Meanwhile, as a director, Morales includes the blips and glitches that happen during such computer calls while nicely contrasting the backdrops in both locales. There is even time for a couple musical interludes.

But the greatest contribution to this tale is her own warm and charming personality as Morales never lets the humorous moments upstage the genuine humanity and caring that she and Duplass present onscreen. An odd couple they may be, but Adam sounds sincere as he thanks Carino “for showing me that people can connect across time zones and languages.”