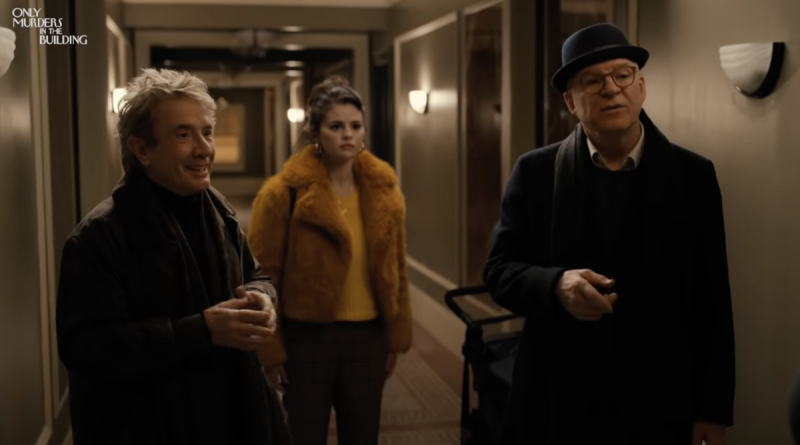 Trust Steve Martin and Martin Short in their sixth collaboration to produce and star in a funny who-dun-it. Trust that the published author Martin with his writing partner John Hoffman has dug deep into a mystery. Trust, too, the addition of Selena Gomez in this troika of hellbent, albeit amateur, detectives.

Mabel and Charles and Oliver live in the Alconia, an apartment building on the Upper West Side of Manhattan. Therein, Mabel is redecorating her aunt’s apartment, where she played as a girl. Charles lives off the residuals, monetary and celebratory, of his television detective series from the Nineties. Oliver is a stage producer wearing the symbolic scarf; he is between jobs, asking for hand-outs.

Tina Fey plays the podcaster detective perfectly. She is joined by other guest stars, principally the wonderful Nathan Lane, the inimitable Jayne Houdyshell, and the singing Sting (yes, Sting). But the whole cast, including Aaron Dominguez, Ryan Broussard, and Michael Cyril Creighton, adds dimension and diversity.

The series was directed by a quartet, chiefly Jamie Babbit, and written by a sextet led by Martin and Hoffman.

The title, Only Murders in the Building, refers to an appeal to the trio to solve adjunct mysteries, but they stick to ones in their majestic building. The mystery is not so silly as you might dismiss if you dismiss the depths of the two Martins. However, you can depend on the funny, given the presence of the two Martins. Listen especially for the notes the two alta caca offers to a man whose cat has removed to the Great Litter Box in the Sky.

Only Murders in the Building has steam heat and all the best of the mod cons and coms.