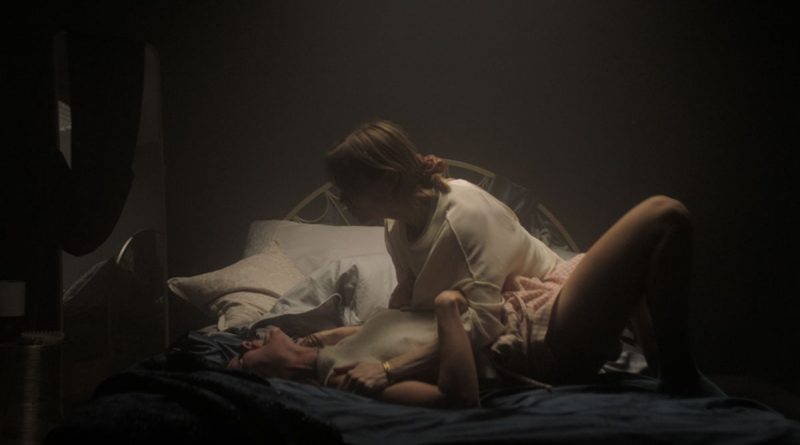 Not only is it a little glib to call A Banquet this year’s Saint Maud, it also grossly underplays the originality and unique kind of dark energy that rumbles through the belly of Scottish filmmaker Ruth Paxton’s feature debut. Yet like Rose Glass’s celebrated horror smash, what A Banquet shares with it – aside from stemming from the imagination of that most precious of thing, a woman horror director – is a deep and abiding dedication to the gendered experience of women under enormous psychological pressure, proving there are no limits to the extent that horror allows a portrait of such women to be constructed through the genre’s driving fascinations with the fantastic, the inexplicable, and the unfathomable.

A Banquet begins with the first of many digestive-related crises when devoted wife and caregiver Holly (Sienna Guillory) suddenly becomes a widow after her seriously ill husband decides he can bear it no more and drinks a bottle of bleach. Left in their opulent yet dark and understandably depressing home, Holly supports herself and her two teenage daughters Betsey (Jessica Alexander) and Isabelle (Ruby Stokes) the best way she knows how; by cooking elaborate, cookbook photograph ready meals that appear to be as much about keeping up their affluent appearance as they are the source of any kind of nutritional value.

While Holly and her children are clearly suffering, Betsey in particular struggles with social alienation and, at a school party, she wanders off to the nearby woods where an unseen epiphany of sorts takes place. Returning home, to her mother’s horror Betsey stops eating completely and yet she does not lose weight, trying to convince her mother that she has had an intense spiritual experience that has transformed her completely, focused as she is on her newfound and deeply believed religious calling. At first struggling to contend with what she unambiguously sees as her daughter’s total and complete psychological collapse, Holly is forced to not just examine her own past and her daughter’s future, but her very own belief system through new eyes as Betsey’s condition deteriorates.

Dominated by a lush chiaroscuro that sucks us in like an aesthetically pleasing black hole, as a world-building exercise A Banquet is fearless in how it weaves themes of grief, identity, care and faith together into an elaborate portrait of three women bound together by crisis. With a script written by Justin Bull, Paxton relies heavily on the strong performances of her three central leads, with David Lidell’s cinematography and Matayas Fekete’s seamless editing all working in immaculate harmony in Paxton’s creation of what feels like a hermetically sealed world of desperation as Holly struggles to save her eldest daughter. An engrossing portrait of trauma, hope, and the shared delusion of love, A Banquet is unshakable, a film that continues to worm its way deeper into our consciousness long after the end credits roll.