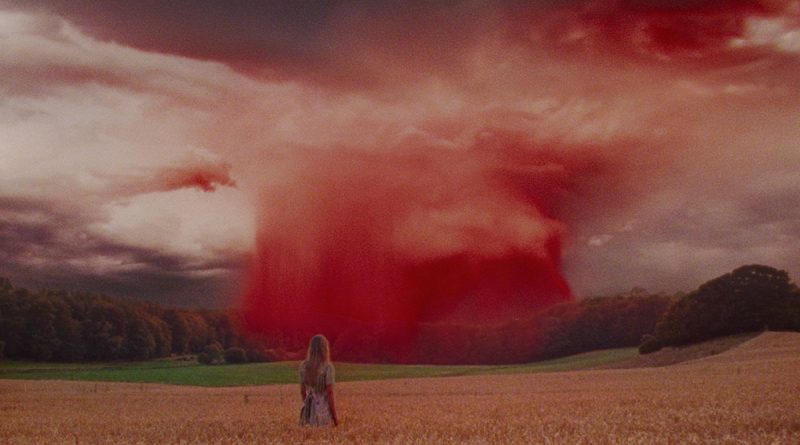 In a brief video introduction to the digital screening of her debut feature film As In Heaven, Danish filmmaker Tea Lindeburg describes the impact of discovering the book that she has here. Although she does not mention neither author nor title, she refers to Marie Bregendahl’s 1912 novel, En dødsnat, which encapsulates the author’s broader creative fascination with rural life in Denmark.

For what is effectively a feminist historical drama, it’s not hard to guess why the filmmakers chose to change the movie’s title from a direct translation of the original, A Night of Death. But although the latter sounds like a doom metal music festival, certainly the opening scene of Lindeburg’s film alone suggests a gothic sensibility at its heart, a spectacular dream or vision by her protagonist Lise (Flora Ofelia Hofmann Lindahl) where a sudden storm showers down not rain, but blood.

Despite the change in title, the words A Night of Death does a more than satisfactory job of summarizing precisely what the film itself is about. Teenage Lise is the oldest of many children who live on a farm with their kind mother Anna (Ida Cæcilie Rasmussen). Despite the dismissal of her absent husband and the dedicated housekeeper, Anna is quite modern in her thinking and firmly believes that education is vital for girls, and as the film begins Lise is excitedly preparing to leave home to attend school. But the “night of death” throws a spanner in the works as the heavily pregnant Anna suffers a violent, horrific delivery that places her own life in significant danger as her children – with our focus on Lise – enduring through the nightmarish evening as they are both excluded from proceedings, while simultaneously aware of the life-and-death stakes their beloved mother faces.

Noting in her introduction that she was drawn to the novel after the birth of her own child and that she was struck by just how contemporary Bregendahl’s novel felt even today, it is not difficult to see where these elements manifest in Lindeburg’s film itself. Both Anna and Lise are caught between an old-world way of thinking, dominated by superstitions and omens, and the film is largely predicated on Anna’s refusal to get medical attention because she had a dream that predicted the evening’s events would happen and that it would be wrong to interfere with that. This stands in sharp opposition to Anna’s more contemporary stance regarding education and gender, and Lise finds herself in a difficult tug-of-war as she wrestles with her faith, her hopes for the future, her love of her family, and her desires. In 2021, it is not too far a stretch to see how ignorance and superstition sits in often dangerous opposition to more progressive, fact-based thinking, particularly when it comes to questions about reproductive rights.

As Lise, her mother, and the women around work through the night to save Anna, this is simultaneously a film where men exist largely on the periphery; they exist primarily (although not solely) to get women pregnant, get drunk, or otherwise make nuisances of themselves. A moving historical drama about being pulled in different directions between the past, present and future, As In Heaven is a dark feminist fairy tale with a real sting in the tail.