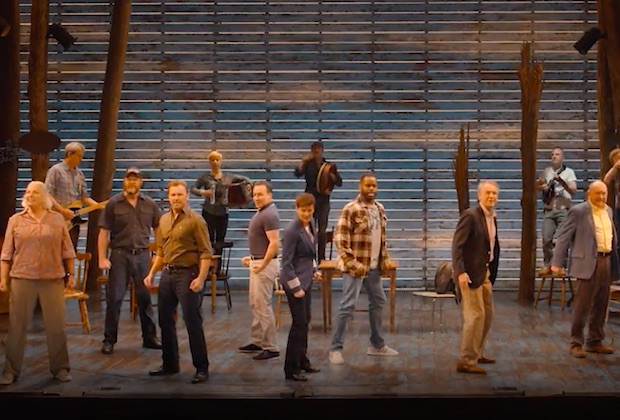 Why do you go to theater? Because it’s entertaining and fun. Because it opens your heart, teaches life-lessons and transports you to another time, another place. Because, occasionally, it conveys the essential goodness and resiliency of the human spirit at the same, shared moment in time.

Now, Apple TV+ presents “Come From Away,” one of Broadway’s best musicals.

After the terrorist attacks on Sept. 11, 2001, all flights crossing the Atlantic to the United States were diverted to Gander, Newfoundland, once a popular refueling spot on the edge of North America. Gander suddenly became the destination for 7,000 bewildered passengers from around the world.

The rousing “Welcome to the Rock” introduces the insular townspeople whose morning coffee at Tim Horton’s began like any other – before planes began to land, sending them scrambling for “Bedding and Blankets,” not to mention school buses, warm clothing, food and medicine, as a nervous, novice TV reporter tries to chronicle the chaos.

Its book is largely based on interviews that Canadian writers Irene Sankoff and David Hein conducted in 2011, when some travelers returned for a 10th anniversary ceremony – because Gander’s genial, person-to-person hospitality was beyond remarkable.

A gay couple from Los Angeles was afraid of encountering homophobia but, instead, found warm acceptance, along with a distraught mother with an NYC firefighter son, a Texas divorcee, her amorous British acquaintance, a wary urban Black man, a Muslim chef and a Rabbi – to name just a few.

Admittedly, many of these characters are composites, but not trailblazing American Airlines pilot Beverly Bass, played by Jenn Colella, whose rousing “Me and the Sky” is a wistful feminist anthem.

The crowd-pleasing, one-hour-45-minute performance fittingly concludes on a life-affirming note: “We honor what was lost – but we also commemorate what we found.”