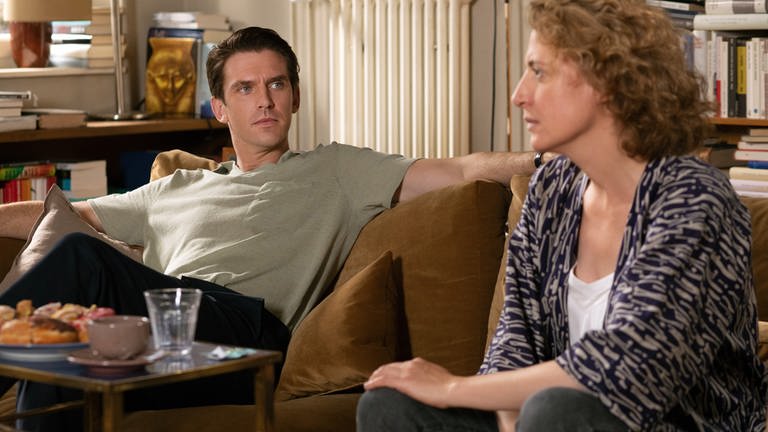 Way back in 1987, Susan Seidelman of Desperately Seeking Susan fame directed a sci-fi romantic comedy titled Making Mr. Right that starred John Malkovich in the dual role of a repressed scientist who designs an android who looks just like him but with emotions. Most critics agreed with the headline accompanying New York Magazine critic David Denby’s review at the time – namely, Making Mr. Wrong.

Now 34 years later, here comes the German film I’m Your Man directed by Maria Schrader, (TV’s Unorthodox) that revolves around a robotic dreamboat who is part of a study involving companions who are tailored-made for one human’s personality and emotional needs. In the case of middle-aged academic Alma (Maren Eggert) — who just broke up with a co-worker — she signs on to the three-week experiment in order to fund her own research project. That requires her to live with non-human Tom (Dan Stevens of Downton Abbey fame, the most valuable player in the cast who constantly ups the humor ante with much aplomb. And take a moment to consider that this English actor had to learn German for his role).

Adding to my own emotional needs is the casting of Toni Erdman star Sandra Huller, with her blonde bob, sly smile and perfect red lipstick, whose character is tasked to oversee the android experiment. She is buoyant to excess, but there might be a justifiable reason for that.

Alma is a no-nonsense sort of person and Tom needs to learn how to swiftly adjust to her moods. He’s a handsome guy, even if his piercing crystal blue eyes barely blink. He’s a fairly quick study as he swiftly surmises that his human companion doesn’t fall for corny pick-up lines such as “Your eyes are like two mountain lakes I could sink into.” Nor is she the type to welcome a filled bathtub drowning in scented rose petals.

Initially, Alma treats Tom as an annoyance while making him use her laundry room as his hideaway in her apartment. She leaves him at a coffee shop while she heads into work and shows up many hours later while Tom is stuck in the pouring rain. Not that Tom minds, since his algorithms automatically adjust to surmise to Alma’s needs and desires. But when she allows her personal Romeo into her work space, he shares some calamitous news about her project.

But Schrader eventually allows us and Tom, who reminds me of a more-coordinated and sexier version of the Scarecrow from The Wizard of Oz, to see a humanized Alma in a different light when she visits her 80-something father along with her sister and nephew. At a time when we are once again isolating ourselves because of COVID-19, this amusing semi-rom-com will hit the spot with its eventual waterfall of feelings.