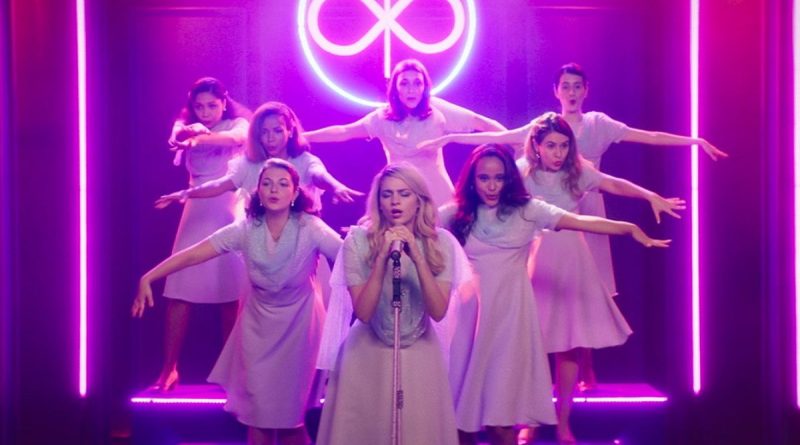 Anita Rocha da Silveira’s Medusa is a powerful contemporary reimagining of the girl gang movie, its protagonists’ vigilantism driven not by deviance or vengeance, but by the all-consuming faith in their own Christian righteousness. Watching that explode so spectacularly is joy to behold, itself ironically something close to a religious experience. Now playing in the Contemporary World Cinema stream of the 2021 Toronto International Film Festival, Medusa follows Mari (Mari Oliveira) who, with her friend Michele (Lara Tremouroux), is part of a wholesome all-girl singing troupe who serenade their radical, misogynist Christian sect’s congregation with songs about women staying in their place and keeping themselves nice for their men. So dedicated are they to their faith and their commitment to upholding what they see as this holy feminine ideal that they roam the streets at night, viciously attacking women they deem sinful. When one of these victim’s slashes Mari’s face, Mari is forced into a job where a new world opens up to her and she begins to question her way of life.

Medusa is wild, glamorous, and marked with a dark, slick fury. But it’s not all surface sheen; Silveira is clearly no one’s fool and has little interest in subtlety in her take-down of the hypocrisy and violence of the religious right. While set in contemporary Brazil, there’s a universality to the film’s tale of young women caught in the contradictory frenzy of the unrelenting gaze of others – male and female – which, of course, contains a power that the film’s very name underscores with its ancient, mythic potency. The gendered gaze is provocatively complicated as Medusa rejects the simplistic male gaze = bad / female gaze = good equation that reduces discourse about representation to unproductive and often frequently harmful binaries.

Rather, Silveira makes a point from the film’s very opening moments of underscoring just how violent and sadistic the female gaze can be when cast upon other women. This is a film about misogyny, yes, but here, quite radically, that is a trait that women are as capable of having as men. Self-hating women abound in Medusa, and it is only the power of looking back, of screaming with ancient force, that ignites real, meaningful change.