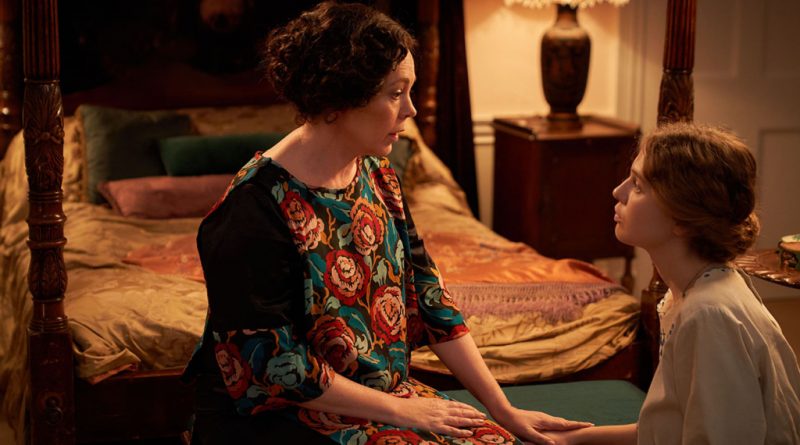 The film largely taking place on March 30th, 1924, on Jane’s day off from working as maid for Mr. and Mrs. Niven (Colin Firth and Olivia Colman) a couple actively grieving the loss of their son. She has plans to meet with secret lover Paul Sheringham (Josh O’Connor), a wealthy neighbor’s son engaged to enter into a loveless marriage with Emma Hobday. They were put together as the last two surviving children of a trio of old-moneyed English families, all struggling with the loss of their sons killed in the war. Watching his own parents and the two other couples operate as shadows of themselves only exacerbates Paul’s survivor’s guilt. He is one of the only boys of his generation left alive. He finds some solace in his time with Jane, and it’s clear he loves her in his way, but it’s also clear he is using her in part to drown his grief. Knowing their affair can’t continue and expecting it to be their final day together, Paul and Jane fill their time with passionate sex sessions and intimate conversation. The audience witnesses all this, with the two stripped bare, naked together body and soul, their nakedness a sign of their trust in other above all others as well as a metaphor for the fact that deep down all humans are the same.

Meanwhile, the families come together, ostensible for a celebration at Sunday luncheon, and are waiting for the missing Paul to appear, but the scene devolves at the rare moment when the missing sons are mentioned. It was bound to happen, since the deaths of Dick, Freddy, James and Philip are like specters hovering over every gathering. “They’re all gone! They’re all f*cking gone!” cries Colman’s Mrs. Niven. No class is exempt from suffering loss, the great equalizer. It’s something they can’t erase, no matter how hard they try to cocktail and dinner party their way out of it. All semblance of genteel English culture evaporates, exposing the truth that death favors the rich and poor, the maid and the matron equally.

One of the most striking scenes in the film is when Jane, alone after Paul leaves for the luncheon, wanders around the manor naked. She sits in the leather library chair, clips and keeps a live orchid from the foyer arrangement, and eats beer and meat pie in the kitchen. For better and worse, she knows she has a freedom that the family she serves, and her flame Paul, don’t have. In that moment, she has no experience of loss, nor is she tethered to expectations of class or family. They are some of the most powerful minutes in Mothering Sunday. In an interview with Deadline, Husson explained why it was so important for both Odessa Young and Josh O’Connor to be fully nude in their scenes. ““It gives so much power to the character I feel, because the nudity’s not just about sex, it’s about intimacy. It’s much more than sex and I really tried to film that in this way. Yes, they’re naked when they have sex, but that’s basically not when I film them the most naked, it’s when they talk.” Both lead actors Young and O’Connor, as well as co-stars Colman and Firth bring complicated, layered performances and bring the story to life.

In the original novella, the story is told with time slipping back and forth between the day and an older Jane considering it and how it changed her life. Screenwriter Alice Birch (Lady Macbeth) builds on that structure, allowing Jane, now a writer, to replay the many tragedies of her life from a further distance, so we see Jane’s understanding of the world and the impermanence of love, as well as her perspective on class and duty shift in both real time and from across the years. The flashes back and forth can be dizzying at times, but costume and hairstyle makes the separation clearer.

If the haunting song towards the end of Mothering Sunday sounds like something in the style of what you’ve heard from M83, that’s because it’s from former member Morgan Kibby. In her third time teaming up with Husson, she uses both her training as pianist and cellist in the more classical themes, and beautifully leverages her experience in the electronic outfit for the last more contemporary cue. Kudos to Kibby for a truly moving score, and to Husson for continuing to support the hiring of a female composer, as well as a female editor and stunt coordinator.

EDITOR’S NOTE:MOTHERING SUNDAY is AWFJ’s Movie of the Week for March 25, 2022.