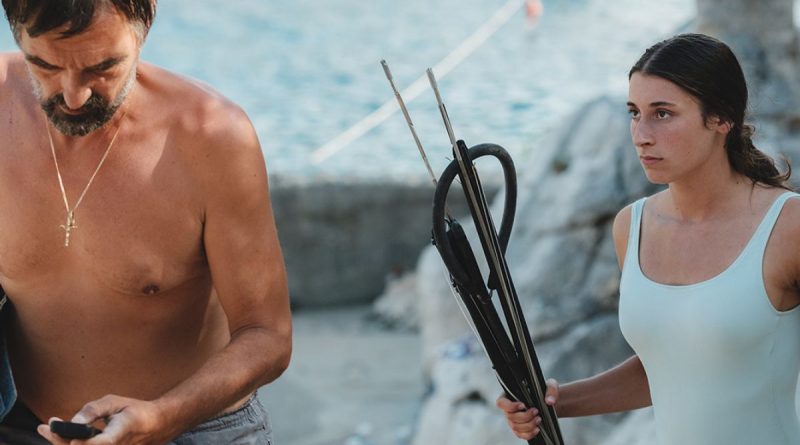 On paper, Antoneta Alamat Kusijanović’s Murina risks coming across as little more than a run-of-the-mill coming of age story, but surely if cinema was only about what it would be on paper, it would be a novel and not a film. What erupts on screen here is a sensory explosion that demands an immersive, intimate relationship with Kusijanović’s protagonist, 16-year-old Julija (Gracija Filipovic), whose idyllic-looking life on a beautiful Croatian island disguises the repressed desire for adventure that sits in direct opposition to her father Ante’s (Leon Lucev) determination to keep his daughter and her young mother Nela (Danica Curcic) firmly under his thumb.

With its executive producers including one Mr. Martin Scorsese, the Dubrovnik-born, New York-based Kusijanović has some impressive names championing her career, based on a series of previous shorts including Nonia (2013), Eye for an Eye (2015), If We Must Die (2016), and Into the Blue (2017). With this, her debut feature, the potential Kusijanović’s previous work suggested has been more than confirmed with Murina, winning the coveted Camera d’Or at Cannes and now playing at the Toronto International Film Festival.

From the very first moments of the film, even before we meet Julija, life underwater is presented as the norm from which events on land, in the human world, notably and uncomfortably deviate. Raised on the breathtaking land of her ancestors, the awkward, quiet Julija who slowly finds her voice during the film flourishes when diving, a water sprite as much as a teenage girl. Desperate to sell the land to developers as a resort for Italian tourists, Ante invites his wealthy, successful friend Javier (played by Māori actor Cliff Curtis) in an attempt to woo him and use his success to sell his land so he can move to Dubrovnik with his wife and daughter. Although estranged for many years, the two reunite like brothers, but Ante soon discovers the powerful impact his old friend has on his daughter especially as a man of the world, unable to disguise his outrage when Javier encourages Julija to leave home and study at Harvard.

At first, there’s a hint that Murina might just be another on-the-nose “teenage girl falls for middle aged man and discovers herself” cliche, but the film is anything but. While certainly there’s a little crush there, Julija is more interested in the dynamic between Javier and her mother; while the latter downplays it, Julija is no fool and can sense attraction instantly. As Ante fears losing control over his family, his oppressive dominance becomes increasingly less discrete and, at times, even unhinged. But the core relationship of the film is ultimately that between mother and daughter; desperate to be a part of the world, the close bond between Julija and Nela is challenged as the former struggles to understand why her mother has chosen the life for them that she has. Where that takes them – Julija in particular – is triggered by the actions of Javier and Ante, but the film is, ultimately, the story of Julija and Nela themselves.

As much a conceptual prison break film as an orthodox coming of age one, Murina dazzles largely due to the performance of Filipovic herself, with Kusijanović’s masterful direction pulling all the film’s elements together in perfect harmony – including, it must be noted, exquisite cinematography by the celebrated Hélène Louvart, whose previous collaborators include Agnès Varda, Claire Denis, Wim Wenders, and Léos Carax. Murina is an intoxicating deep dive into oppression, the taste of freedom, and that first glimpse of understanding how complex the adult world can be, all in the name of discovering oneself.