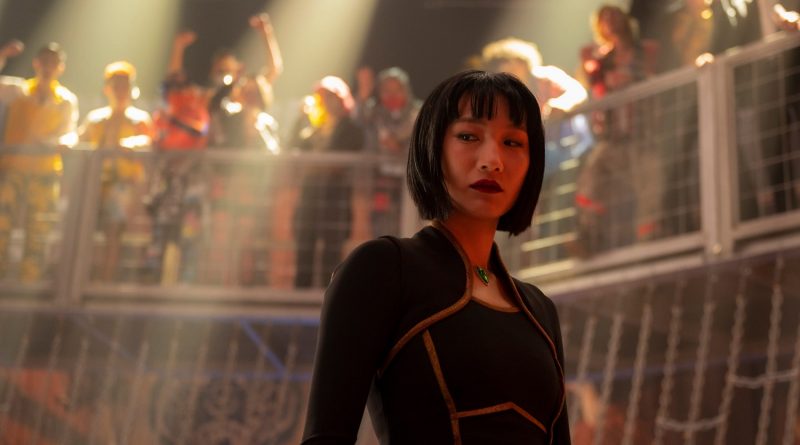 This newest addition to the Marvel Cinematic Universe (MCU) is the origin story of Shang-Chi (Simu Liu), the slacker son of an immortal crime lord (Tony Chiu-Wai Leong) who has seemingly rejected his father’s empire.

Instead, along with his best friend Katy (Awkwafina), he’s a parking valet at a fancy San Francisco hotel, using the Americanized name of Shaun. Then – one evening, on his way home – he’s accosted by thugs who attempt to steal a pendant from around his neck. Big mistake!

Suddenly, Shang reveals his true identity as an elite assassin who has been hiding from his 1,000-year old supervillain father, Wenwu – a.k.a. The Mandarin – who controls the magical Ten Rings that grant its wearer godlike power.

Accompanied by Katy, Shang then takes off for Macau to find his sister Xialing (Meng’er Zhang) and stop Wenwu from invading the mythical city of Ta Lo, where he thinks his presumed-dead wife (Fala Chen), Shang’s mother, is being held hostage.

As Wenwu says: “You can’t outrun who you really are.”

Predictably, there are convoluted references to The Blip (referring to events in Avengers: Infinity War and Avengers: Endgame), along with various MCU cameos, plus Micelle Yeoh as Shang’s aunt Jiang Nan and Ben Kingsley as Trevor Slattery.

FYI: Shang-Chi’s comic book history goes back to the ‘70s with ties to the infamous Fu Manchu. Ten Rings was first mentioned in Iron Man (2008) and then in Iron Man 3 (2013), introducing its leader, the Mandarin.

After the two end-credits scenes, there’s a promise: “The Ten Rings Will Return.”

On the Granger Gauge of 1 to 10, Shang-Chi and the Legend of the Ten Rings is a superhero 7 – playing only in theaters (at least for now).