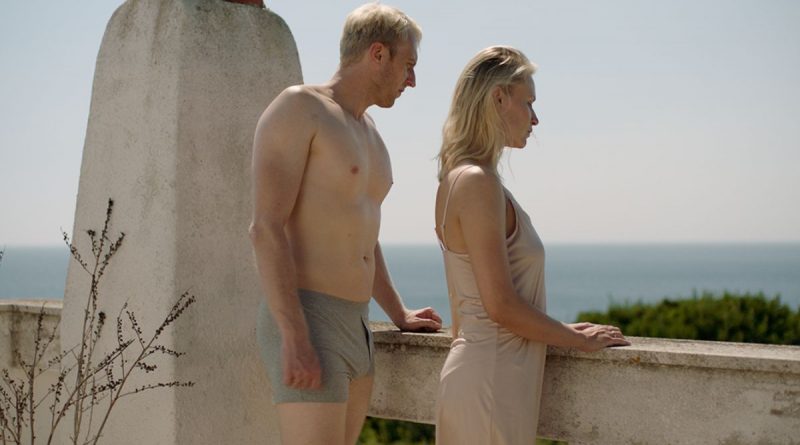 Following up her 2014 short Fragments which was featured in the Cannes Directors’ Fortnight section that year, Polish filmmaker Agnieszka Woszczyńska returns with her feature film debut Silent Land, now playing the Toronto International Film Festival. A quietly scathing exposé of the selfishness and indifference of the bourgeoisie, Woszczyńska takes her time in this film to execute her assault on the cruelty and detachment of the wealthy, clearly relishing digging the knife in slowly and subtly in this tense, slow-burning exercise in class rage.

Anna (Agnieszka Zulewska) and Adam (Dobromir Dymecki) couldn’t be blonder, wealthier, or more privileged, an attractive young Polish married couple who indulge in a sunny holiday on the Italian coast in a once-thriving tourist town that, with the arrival of the military to deal with what is implied is a growing influx of boat people, has lost some of its previous shine. Anna and Adam don’t mind; they just want somewhere pretty with a pool, and to eat, drink, and soak up the sun. But a local water shortage means the pool has gone to ruin, but the Polish couple Karen it as politely as they can muster; the pool must be fixed, they demand. That is why they chose this rental house, water shortage or no. Accordingly, a young immigrant worker and his peace-disrupting jackhammer arrives the next morning, and although the pool is fixed, his work-related death demands a police investigation that increasingly finds cracks in Anna and Adam’s story regarding what happened.

Although determined to continue their holiday, the incident sees the first signs that there are fractures in the couple’s relationship as they contend with the continuing police investigation, curious locals, and the unavoidable tension the incident has triggered within their own relationship. Fluctuating between their business-as-usual vacation activities of fine dining, sunbathing and vanilla sex and a growing sense of disconnection, Woszczyńska is in no rush to build less a sense of suspense than active discomfort in her audience as the truth is slowly revealed.

The question “what kind of people are these?” lies at the heart of the film, and as the answer gradually comes to light, issues of communication and its opacity are made literal through the cacophony of various languages in the film that different people speak, including some while excluding others. Resisting any need to make overt judgements, in Silent Land Woszczyńska confidently steps back and lets us make our own call about the moral questions her film prompts in her compelling, enigmatic debut.