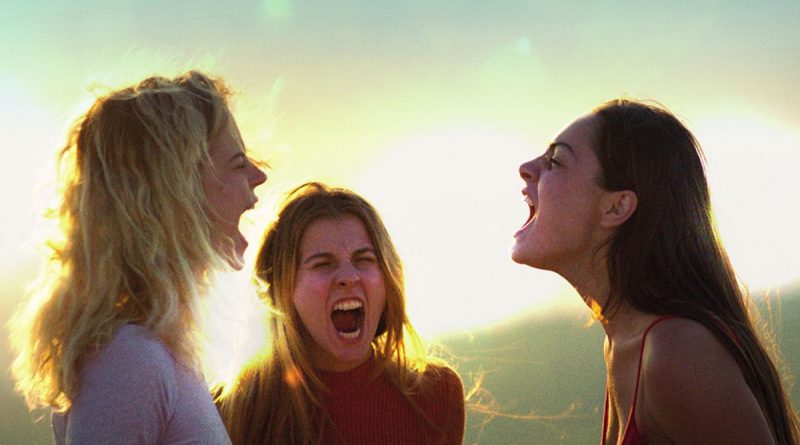 Best known for her on-screen performance as the maid in Céline Sciamma’s exquisite Portrait of a Lady on Fire, at a mere twenty years old French-based, Kosovo-born Luàna Bajrami turns to her homeland as the site of her feature film debut, The Hill Where the Lionesses Roar (Luaneshat e kodrës). As others have noted, while there are certainly echoes here of Deniz Gamze Ergüven’s 2015 film Mustang with its focus on young women and their search for autonomy in a cultural context that seeks to deny them precisely that, The Hill Where the Lionesses Roar is far from derivative. Despite – or indeed, perhaps precisely because – of her young age, Bajrami’s directorial vision is as strong and as fearless as her protagonists themselves.

The hill of the film’s title is a literal one, a location from where its three central characters – Qe (Flaka Latifi), Li (Era Balaj), and Jeta (Uratë Shabani) – survey the objectively beautiful rural landscape that surrounds them. But where we see beauty, these three young women see the stillness and tranquillity as standing in direct opposition to their thirst not just for excitement and adventure, but for, well, anything at all interesting to happen. Their roars too are literal, a playful primal scream that belies a true, deep frustration whose evolution the film will track as they decide to form a girl gang and embark upon a stream of robberies, allowing them – for a moment at least – a glimpse of a life of glamor and excitement well beyond their mundane status quo.

As Qe, Li and Jeta, the three young women at the heart of the film are granted impressive complexity by Latifi, Balaj and Shabani respectively (director Bajrami herself makes an understated yet important cameo as a French visitor to the town whose presence further complicates the way the three main characters see themselves). Actively identifying themselves as the lionesses of the hill, our three protagonists each seek a way to discover power in the differing contexts in which their specific social circumstances have denied them precisely that. And all this, perhaps inescapably, takes place in a world where sexual violence (or at least the threat of it) hovers almost ambiently in the atmosphere, manifesting at times in ways that are far more explicit.

Currently playing in the Contemporary World Cinema stream at the 2021 Toronto International Film Festival, while The Hill Where the Lionesses Roar has all the trappings of the orthodox coming-of-age film, its carefully constructed ambiguities and ellipses are where its true magic lies. A strong film about how tough the world can be for strong young women, Bajrami reveals she has just as much to offer behind the camera as she does in front of it.