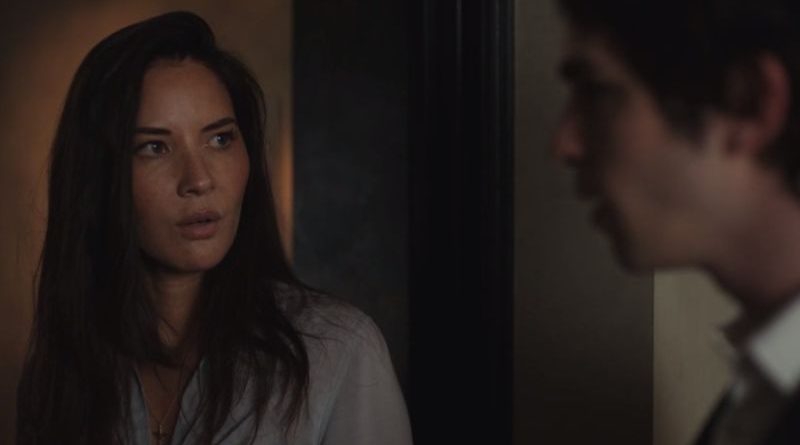 Violet Calder (Olivia Munn) is a 32-year-old woman whose family are from Michigan who’s not just successfully made the move to L.A. to establish a career in the film industry, but she has – on the surface at least – flourished. Now the Head of Production for Gaines Pictures, she has won multiple awards from her films, and, for her abusive and unappreciative boss Tom (Dennis Boutsikaris), she has made a ton of money. But Violet smiles through gritted teeth and keeps pushing through, focused on her passion projects and determined to bring them to fruition. What those in her world don’t see, however, is the turmoil that bubbles away underneath, undermining and actively hurting Violet both personally and professionally as she tries to gather enough strength to fight back against her own instinct, who default setting is fear and insecurity driven self-sabotage.

The debut film by director/writer/producer Justine Bateman, while most immediately known for her work as an actor herself, Violet reveals Bateman is a woman with both an extraordinarily precise vision, and the talent and good old-fashioned moxie to pull it off. In the introduction to the film’s screening at this year’s Toronto International Film Festival, Bateman stated warmly “if you’ve ever made a fear-based decision in your life that you feel took you off track, this film is for you”. Wrapping up her brief speech, her final thought is even more goosebump-inducing after seeing Violet than it was beforehand; articulating her ultimate goal for how her she wishes her audience might feel after watching the film, Bateman stated simply, “I hope you feel more yourself than you do right now”.

Despite (or perhaps precisely because) of the simplicity of this statement, all the boldness, ambition and scale of Bateman’s vision with Violet are made inescapably clear. The real magic here, however, is that somehow the film lives up to Bateman’s stated intent. Trying to describe the formal and stylistic framework through which Bateman allows her audience to move so intimately into Violet’s interior space almost feels somewhat crude, as it can never truly capture the poetry of what Bateman’s use of sound and vision do – and that, perhaps, is precisely the point. Violet is a film because it could only ever be a film; it is not a novel, it is not a photograph, it is not a song. While sharing elements of each, there’s a sense of purity to Violet in a cinematic sense as much as there is a striking sense of authenticity and genuineness that in the hands of another filmmaker could far-too-easily collapse into an exercise in glib, undergraduate-level psychoanalysis.

What we have here is the opposite; Violet, the character and the film, is brave, audacious, tentative, fragile, unbreakable. It is these very paradoxes that draw us in, and the ‘how’ here is of as much interest as the ‘why’. The answers are impressive for their eloquence as much as their directness. Violet, like so many of us, has a voice in her head – unlike us, however, hers is that of Justin Theroux. Stern, insulting, and constantly undermining Violet’s sense of self, this voice – strong, male, unwavering – is a bully, and his advice seeks to unrelentingly oppress Violet, all in the name of keeping her safe and protected. This voice lies in direct opposition to the part of Violet that cannot be heard, but that wants to fight back, and who knows that voice is wrong. Far too often, however, it listens, and her doubt, fear and self-loathing come to the fore. Here, that too is rendered literal, this time in the shape of handwritten phrases and often just groups of words that appear on-screen. It is the tension between these two factions of Violet’s internal life that drives the film’s emotional drama.

Violet is a film about toxic relationships, not just with others, but – first and foremost – with ourselves. It makes literal the internal struggles so many of us face on a daily basis: how much do we share? Who do we trust? How do we change our lives? Violet uses the codes and conventions of cinema and weaves them into Bateman’s own strikingly creative approach to filmmaking to address the tricky representational arena of self-sabotage, as the character is pushed and pulled with exhausting frequency between what she feels, what she does, and what the cruel, infantalizing voice in her head tells her about herself. Violet is a film about struggle, about fighting back and taking control, but the way that Bateman brings this internal universe to life makes it not only one of the most memorable films at TIFF this year.