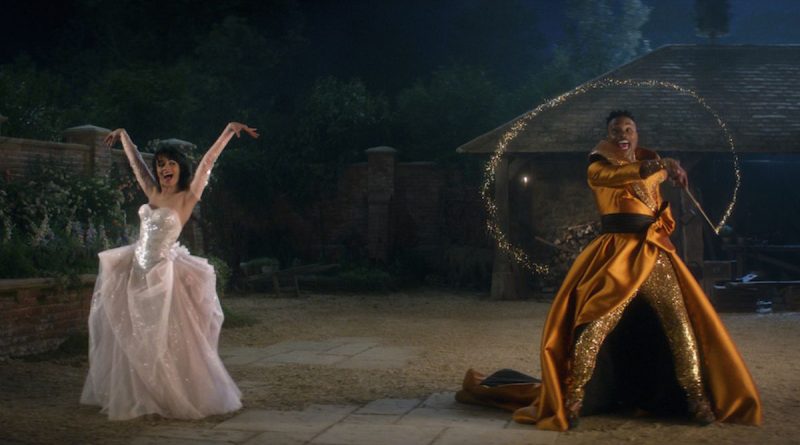 “You’re going to know my name!” is Cinderella’s new rallying cry, according to the latest interpretation of the fable available on Amazon Prime.

The overall experience of this all-singing, all-dancing version of Cinderella is a bit like an extended episode of American Idol, with some High School Musical and a bit of Hamilton thrown in for good measure.

Odd (and obvious) musical choices and a muddled moral add up to wishy-washy storytelling on this Cinderella.

Speaking of Disney, Cinderella opens with a pack of performing villagers hard at work that will probably make you think of Beauty and The Beast, whether you want to or not. Why they are dancing and toiling to Rhythm Nation remains a mystery.

Camila Cabello is Cinderella; her wicked Stepmother (Idina Menzel) is really just a misunderstood artist and her terrible stepsisters (Maddie Baillio and Charlotte Spencer) simper a bit but are otherwise not really part of the story.

While Stepmother pushes marriage on all three young women in her care, Cinderella dreams of being a businesswoman and dress designer.

Cinderella sings one of the few songs created for the movie, Million To One, about how she’ll be that standout success:

If it’s a million to one

I’m gonna be that one and

If it’s a shot in the dark

I’m gonna be the sun

Ella’s ambition — to design dresses — is not about design or dresses, so don’t be looking for a Phantom Thread moment. It’s about creating fussy prom frocks that will make her famous. Why would our liberated businesswoman, keen to take over the world, be so intent upon dressing other women in those fluffy meringue princess things that all look like wedding gowns?

Wicked Stepmother advises Cinderella that engaging in business in shaming; advises her to smile more; wrecks a beautiful ballgown Cinderella has created.

This makes no sense. If the stepmother is interested in money and position, why would she deter Cinderella from doing something that might be profitable?

The prince (Nicholas Galitzine), meanwhile, faces some of the same career problems and he, too, has to sing pallid pop songs. His father the king (Pierce Brosnan) wants him to marry a princess for her land holdings.

His mother the queen (Minnie Driver) believes in love and feminism. Or something.

The prince doesn’t want to marry for strategy and doesn’t even want to be king. Luckily, his sister Princess Gwen (Talulah Greive) has terrific ideas about the environment and how she’ll fix the kingdom. By golly.

Anyway, the ball happens at the palace. That much remains the same.

Cinderella gets to the ball with the help of her Fabulous Godmother, which entails Billy Porter not getting nearly enough screen time, and soon enough she meets the prince. More singing, more dancing, and so forth.

Cue true love, slight tussle over dressmaking career, resolution, going to have it all!! Big West Side Story dance finale.

The song is all about marrying a rich guy and forgetting your dreams. It’s the most memorable song in the movie, likely not what the filmmakers intended.

This mixed-up modern Cinderella is written and directed by Kay Cannon (Pitch Perfect) with a score from Mychael Danna and Jessica Weiss; the movie includes a cameo from James Corden, one of the film’s producers, as a wiseacre dancing mouse/man.

If only the magic that turns a pumpkin into a beautiful carriage could do the same with the sow’s ear/silk purse situation.