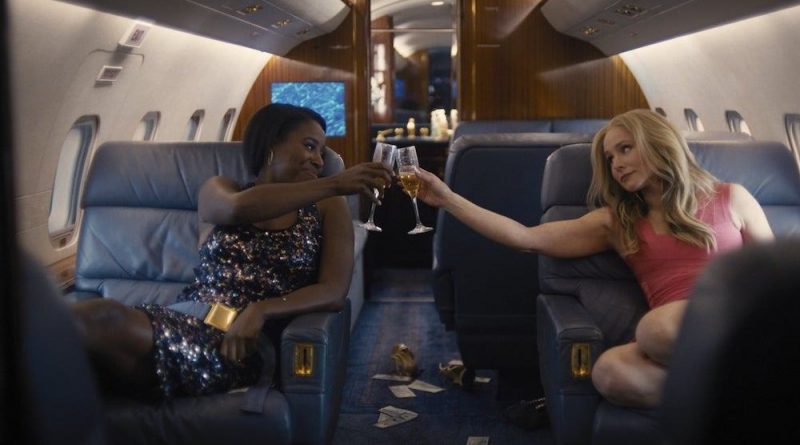 For some, couponing is a thrill. For others it’s a necessity. For Connie Kaminski and her best friend Jojo Johnson, it’s a multi-million dollar business enterprise.

Written and directed by the husband and wife team of Aron Gaudet and Gita Pullapilly (Beneath the Harvest Sky), Queenpins stars Kristen Bell as Connie, a former Olympian and suburban housewife who finds solace in couponing and stockpiling, while Kirby Howell-Baptiste is Jojo, the victim of identity fraud whose life has been so badly damaged by said fraud that she’s been forced to move back into her mother’s home and is trying to make a name for herself as a YouTube star.

The neighbours find friendship and solace in each other – not to mention their common passion for couponing. After a particularly bad fight with her husband, Connie tries to find solace in a box of Wheaties only to find the box is stale. One letter of complaint later, the company sends her a coupon for a free box of cereal which gets Connie and Jojo thinking: what if they were to sell these coupons for half of their value? Their habit could be more than a hobby; it could be a real business.

And so Connie and Jojo go about figuring out where and how to get coupons in bulk and how to sell said coupons to savvy shoppers. The next thing you know they’re in business, selling coupons by the thousands and six months later, trying to clean their money in some rather ridiculous ways. It’s at this point that Queenpins goes from a tale of two friends with a rather innovative (if clearly illegal) money-making scheme to one of criminals who don’t know what they’re doing. You just know that things aren’t going to end well for the “Queenpins.”

Gaudet and Pullapilly’s story is loosely based on the 2012 real-life tale of three Arizona women who had a $25 million dollar couponing scheme. At the time of the raid, police also found cars, a boat and guns. While the downfall of the real coupon queens came as the result of internal audit by P&G, in the case of Connie and Jojo, the pair are brought down by a loss prevention office, Paul Walter Hauser who provides quite a few of the film’s comedic moments with his “smart but also dumb” approach to his job, and a postal services officer played by Vince Vaughn as a serious man with a dry sense of humour.

While the hunt for the criminals adds an interesting dimension to the movie, Queenpins is really the story of Connie and Jojo and their friendship, not to mention finding and using each other’s strengths to help themselves. Bell and Howell-Baptiste have a natural ease together and the pair really sell this story, with all its craziness, and it never feels ridiculous and saccharine. It certainly helps that Gaudet and Pullapilly’s script doesn’t ridicule any of the characters, instead treating them all with respect, not to mention giving each personality and moments that highlight their humanity.

Queenpins succeeds by being entertaining without sacrificing heart and intelligence. It’s also a movie that will have you cheering for the criminals; and when they’re as lovable as Connie and Jojo, it’s almost easy to forget that what they did was a crime. And really, when we’re talking about giant corporations and the rich getting richer… perhaps their crime was not as bad as it was made out to be. Regardless of your take on the criminality, Queenpins is certain to entertain.