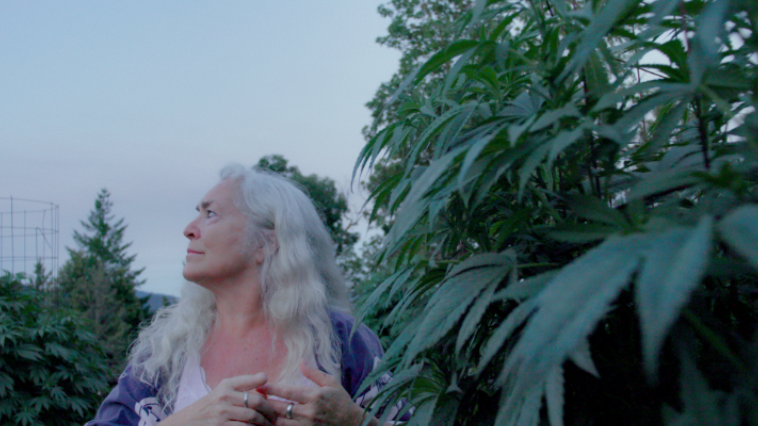 Co-writer/directors Mario Furloni and Kate McLean’s small, focused drama about changing times and the lives they roll over with chilling indifference, Freeland is anchored by Krisha Fairchild’s beautifully nuanced performance as Davi, a longtime pot farmer who’s rolled with the changing times for so long that she’s rocked to her core when they finally collide headlong with her laid-back nature.

The films is set and was shot in Humboldt County, part of the “Emerald Triangle” of California pot farming since the 1960’s. Business is booming, thanks to legal cannabis dispensaries, but Davi is old school; she’s a businesswoman who learned her trade before it became Big Business, legal and freighted with all the attendant paperwork, permits and bureaucracy. She has a crew of three much- younger workers–Josh (Frank Mosley), Mara (Lily Gladstone) and Casey (Cameron Matthews)–whom she treats as much like pals and/or relatives as employees, but while they share her love of a life far from the madding crowd, they’re rooted in the 21st century. Davi has decades of experience going with the flow and keeping her business afloat, but she’s still a flower child at heart and after 32 years a “Notice to Abate Nuisance” sign tacked up on her property just as she’s preparing to harvest her thriving crop marks the beginning of the end of her ability to roll with the punches.

McLean and Furloni’s story is fundamentally familiar, pitting a commercial bureaucracy whose complexities are weighted against the little guy who’s been in it from the start and its beauty–much of it literal and location includes lushly beautiful cannabis fields–is in the details. Davi is a fully realized character, a woman who’s beaten considerable odds not only to survive the collapse of ‘60s and early ‘70s counterculture but to thrive in a corner her younger self could never have imagined. Not only has pot, the incense of ‘60s communes, clubs and protests, achieved a level of cultural and legal acceptance unimaginable in her youth but it’s become profession so legally lucrative that it’s part of the establishment. Fairchild’s performance is simply phenomenal and drives the film as Davi becomes increasingly unable to hold together the business that’s become her life, both a link to her youth and a foothold in the present. And its concluding shot of a decades-younger Davi, swimming sky-clad in a crystal clear stream is both exquisitely lovely and heartbreaking.