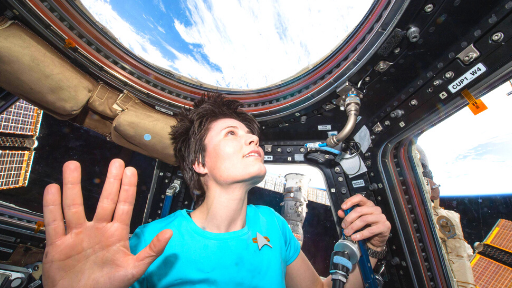 Most of us go through our days without thinking about the fact that there are human beings living in low Earth orbit on the International Space Station, about 250 miles above our planet.

The Wonderful: Stories from the Space Station should change that.

While our nations are trying to one-up each other and keep extremists from committing mass destruction, astronauts and cosmonauts and occasional visitors are up there in the space station – which is visible to the naked eye – working and interacting in harmony and camaraderie.

While we’re down here bickering and bloviating about the mundane – and occasionally the impactful, they’re up there orbiting Earth every 90 minutes and discussing and working things out with a common purpose.

That’s the space program we dreamed of as children.

Directed by Clare Lewins, The Wonderful traces the origins of the space station to President John F. Kennedy and then continues the thread up to the present. It combines images of an incredible machine floating above a big blue ball with interviews of the amazing men and women who have lived and worked on the station and the families they leave behind.

It seems as though most of the footage we usually see of life on the ISS features the gimmicky, low-gravity stunts that amuse and intrigue us – there’s a little bit of that here. But primarily the film leans toward the inspirational and existential.

We root for every station resident Lewins introduces, and we’re wowed by their dreams and experiences. We learn about them as children and what drew them to space.

The stories are funny and heartwarming, varied and similar. Lewins reminds of us the bonds between humans of all nationalities, whether it’s in daily life or during unthinkable events.

Every story is fascinating, but some of players are featured more prominently, including Scott Kelly, Peggy Whitson, Ken Bowersox, Samantha Cristoforetti, Sergey Volkov and Koichi Wakata. They all command respect, but they are also like us – flawed and sometimes confused, in addition to all their admirable traits.

The film’s atmosphere is a reflection of the station’s position in the atmosphere – dramatic, ethereal, beautiful, stunning. Language barely does justice to this documentary. The Wonderful lives up to its name.

Betsy Pickle is a freelance film critic and journalist. She was the film critic at the Knoxville News Sentinel from May 1985 to November 2008. A Knoxville native, she graduated from the University of Tennessee with a B.S. in communications. In 1992, Betsy co-founded the Southeastern Film Critics Association, a group that has grown to more than 40 members in nine states. She served as SEFCA's president 2001-2004. She is a past member of the advisory council of the Tennessee Film, Entertainment and Music Commission and has served as a judge at the Nashville Film Festival, the Asheville Film Festival and the late and lamented Valleyfest Film Festival. Her reviews and features have appeared in newspapers from Atlanta to Anchorage and Stuart, Fla., to Sacramento, Calif.