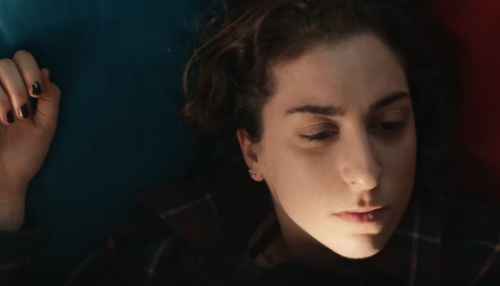 Trauma has a ripple effect, something that the empathetic indie drama What She Said recognizes. There’s the trauma that the person involved experiences but also the feelings of their loved ones. Anger. Sadness. The guilt over not protecting them, or not doing more, even if there was little they could do.

A year after she was raped, Sam (Jenny Lester, Tahara) has escaped to her family’s cabin over Thanksgiving to work on her dissertation. She’s also toying with the idea of dropping the charges before her rapist’s upcoming trial. When her brother, Eli (Britt Michael Gordon), learns of this, however, he marshals his sister Becca (Paige Berkovitz), their friends, and significant others for an “intervention” to convince Sam to press onward. Only Meghan (Jarielle Uter) and Ruthy (Lucas Calzada) throw up blockades in Eli’s steamrolling by asking what Sam wants.

Director Amy Northup, an intimacy coordinator making her feature directorial debut, and Lester, who wrote the screenplay, pack a lot of emotion into this millennial Big Chill-style ensemble. Sometimes there’s a bit too much; Sam’s long-running dislike of Harper (Juliana Jurenas), her former best friend who married Eli, is both perplexing and harsh. Yet Northrup and Lester also effectively show how trauma impacts a larger circle, making Eli’s and Becca’s bossiness easier to bear.

In the opening moments, Sam hangs off her bed upside down, listening to a meditation tape that tells her how to handle her thoughts, but she isn’t the only one whose life feels off-kilter. Her attack occurred after an engagement party at a dive bar that she and her friends frequented in college. Meghan, the bride-to-be, wishes they’d chosen another location. Her fiancé, Aaron (Peter Evangelista), won’t discuss it at all.

Meanwhile, Eli follows the attacker to work, jotting down notes about the guy’s movements, saying he’ll kill him if Sam doesn’t prosecute him, and feeling helpless. He won’t let Harper go to the grocery store alone. Becca, a feminist, keeps bringing up that Sam needs to prevent the guy from doing this to another woman while Ruthie gently and reasonably points out that letting Sam make her own choice would be a more feminist position.

Sam’s boyfriend, Noah (Christopher Mychael Watson, SEAL Team), a traveling concert pianist, cuts his tour short at Eli’s request to offer his support as well. He wants to help Sam to feel better, even as she insists that she’s fine. “How about better than fine?” he asks.

The performers mesh well together, creating camaraderie and a caring for Sam that bolsters their good intentions, even if they unwittingly add to the pressure that Sam already feels. She deflects people’s questions with sarcasm, drinks a lot, picks fights, and storms off for walks alone. Overwhelmed with her own feelings, Sam doesn’t want to deal with their baggage, too, although she comes to appreciate how fortunate she is to have people who love her so much.

The ending of What She Said is ambiguous, but it’s also beside the point, as its focus is on Sam’s emotional journey. The script is hyper-verbal, and the songs on the soundtrack occasionally tell the audience how to feel, but when the film steps back and gives Sam space to show how conflicted she feels, and how desperately she wants normalcy again, its tenderness speaks volumes.