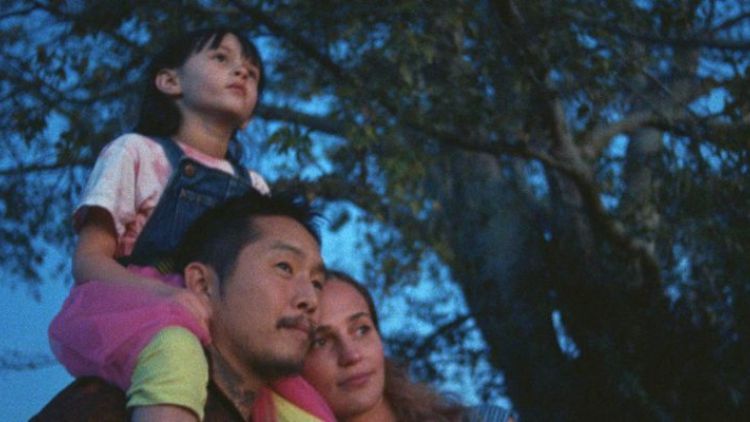 On paper, blending an intimate character study with an urgent social issue drama is the kind of film that awards seasons crave. But Justin Chon’s Blue Bayou is a collection of unfinished ideas and incomplete sketches that unfortunately falls short of a satisfying film.

Chon, who wrote and directed the film, also stars in the lead role as Antonio LeBlanc, a Korean adoptee who learns far too late that legal loopholes and political games have left him facing deportation. Antonio is happily married to Kathy (Alicia Vikander) and helping raise her young daughter Jessie (Sydney Kowalske) while they await the arrival of a new baby girl. Money is tight, but Antonio isn’t afraid of hard work. But, his criminal record makes it hard to find honest work to supplement the income he earns as a tattoo artist.

The opening scenes of Blue Bayou are a gift of tender moments lovingly stitched together to welcome us into Antonio’s world. It starts with a long take as Antonio sits and patiently answers an unseen interviewer’s questions. Jessie sits beside him as he answers questions about where he’s from, and where he’s really from. Antonio takes the questions in stride. He’s an American and has nothing to hide. He just needs work. That interview leads into a spontaneous day with Jessie, introducing his job and his friends and the secluded place in the bayou where he goes to be alone with the thoughts that often stray to the mother who gave him up at age 3.

Soon their perfectly imperfect life is upended when an altercation with police lands Antonio in jail and then in the hands of ICE. He is slapped with an order to leave the country on the grounds that his adoptive parents never filed the proper paperwork to grant him US citizenship.

Up until this point, the story is well constructed, confident, and tinged with just the right amount of anxiety that something is about to go terribly wrong. It is when Antonio’s life starts to fall apart that the cracks in the film also begin to reveal themselves. Alicia Vikander’s performance is ferocious and emotional, but the role of Kathy is shortchanged by too little development. We want to believe that Kathy and Antonio are deeply in love, and there are some strong scenes that let us see that. But too much of the time, she is relegated to the suffering wife who nags when she can’t be otherwise angry or emotional. What could have been a great film about a couple fighting the system becomes a merely passable one in which an underachieving husband frequently disappoints his wife by making one wrong decision after another.

A beautiful friendship emerges when Antonio meets Parker (Linh Dan Pham), a Vietnamese-American woman who offers more insight into his life and past than anyone has ever been able to before. Parker has cancer (as if there weren’t enough plot complications thrown into this script) and, while she isn’t able to provide any specific assistance to the LeBlancs and their legal woes, she gifts Antonio with the sort of extended family he has never had. His adoptive parents have been out of his life for years and his mother-in-law only acknowledges him when absolutely necessary. But with Parker, he shares a connection, if not specifically from his native country, at least from a part of the world that has always been foreign to him. And yet, just like every other vital element of Blue Bayou, Parker’s story sets up a perfect and logical plot point only to shrug and decide to go in a different, much less satisfying direction.

There will be comparisons to Lee Isaac Chung’s Minari, but the similarities end at Korean-born men raising families in America’s deep south. Where Minari quietly told the story of a family searching for the American Dream, Justin Chon’s Blue Bayou loudly attempts to shine a light on a terrible reality many Americans face every day. Antonio is up against one of the most terrifying situations imaginable — getting kicked out of the only country he has ever known, and being sent to a place he doesn’t remember, where he doesn’t speak the language and doesn’t know a soul, all while having to leave behind his own family. Fighting against that is plenty. Chon can’t stop there, though. Instead, he throws in a hidden past, a heist, an ex who happens to be a cop with the most racist and destructive partner possible, and more. It’s all too much, and when it doesn’t fit together by the end, so much of it feels completely pointless.

As much as Chon struggles behind the camera with the script and direction, he is mesmerizing onscreen. Even in the film’s most over-the-top scenes, his performance is truly masterful. He gives us an Antonio we want to root for, even when we want to be mad at him for making a bad decision. Between his powerful work and a tear-jerking final scene, Blue Bayou manages to be just good enough to recommend, even if it is not one of the year’s best.