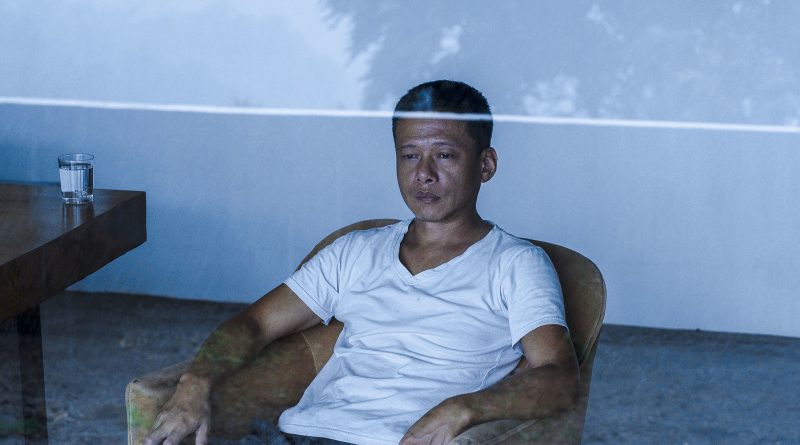 Days has no dialogue in an exercise in minimalist cinema

Writer/director Tsai Ming-liang, one of the outstanding Second New Wave Taiwanese filmmakers, intentionally leaves his eleventh feature Days unsubtitled, rendering it an extremely challenging, minimalist experience at just over two hours running time. What Tsai does achieve is our silent immersion in two men’s lonely lives, our position roughly that of a fly on a distant wall.

Never identified in the film, Kang and Non inhabit dramatically different worlds. Kang appears first, in medium shot, slumped expressionless in a chair, listening to rain. The storm intensifies lashing trees reflected indistinctly on the front of the glass through which Kang looks, immobile except for blinking for over five minutes. This opening, a long held shot, establishes the mood and the pace of the following scenes. Similarly, Non’s introduction, a long shot with the camera again on the outside looking in through a cage-like grid, establishes him as only slightly more active and emphatically less affluent, fixing a meager meal.

Kang gets a massage and acupuncture, a neck brace suggesting some previous injury never explained. There are several showers taken and halfway through the film a lengthy massage for Kang by Non that leads to sexual interaction discreetly presented in a hotel room. After it, as they sit clothed on the bed, Non coaxes a few seconds of music from a small box, he and Kang exchange a few indistinct words, followed by a hug at the door, a few more words and they part. Several scenes capture busy streets and a handful of walks down alleyways. The sounds of nature and urban traffic accompany outdoor events, a man snores, Non sits on a bench again listening to the sweet music.

Not much more happens for the entire film nor does sunlight brighten any of the night exteriors or dark, claustrophobic interiors. For anyone wanting a plot or engaging characters, Days unfolds more like a languorous, listless daydream, haunting and yet elusive.